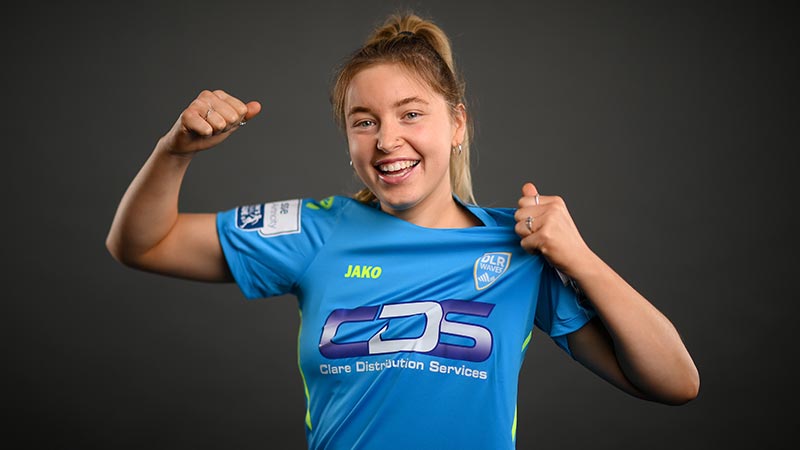 Rovers took the lead early on through Gemma McGuinness but DLR pegged them back before half-time thanks to a Sophie Watters header.

Avril Brierley took Waves into the lead after half-time although Emma Doherty shot in an equaliser for Sligo later on.

Mooney ensured it would be the home side's day however, she rose highest for a late DLR corner to head home the winner in Belfield.

Sligo had the edge in the opening stages as they pushed up on DLR, who had trouble breaking down the visitors when they attacked.

The South Dublin side had an early setback when Sarah McKevitt was injured and forced to leave the field of play in the sixth minute, to be replaced by Avril Brierley.

Another blow would follow for the home side shortly after when they would concede the opening goal of the game.

Rovers' Gemma McGuinness found herself running onto a long Sligo clearance played between the two DLR centre-halves, and the winger used her pace to beat her markers to the ball. She drifted right and shot left past Waves 'keeper Eve Badana to put Sligo up 1-0 in the ninth minute.

Despite conceding, it was Waves that controlled play from then on, although they struggled to beat the excellent Sligo 'keeper Amy Mahon, who was filling in more than enough for injured number 1 Kirsten Sample.

The breakthrough finally came for DLR on 38 minutes. Rachel Doyle won a free in a dangerous position outside the visitor's box and her delivery made its way to the head of Sophie Watters, who headed home an equaliser to see the sides go into the break level.

Waves continued their momentum into the second-half and after some good work on the right wing, Avril Brierley received the ball in the box and she shot in her side's second goal to see them take a 2-1 lead on 49 minutes.

Dominant on the ball, it looked as if DLR would go on to extend their lead. Brierley came close to getting another but she was denied by another Amy Mahon diving save which appeared to boost the visitors.

Rovers headed toward the other end and won a corner, to be taken by Gemma McGuinness. The winger's delivery eventually fell to the feet of Emma Doherty, who used her footwork to make space and the powered her shot into goal to see Sligo go level against the run of play.

It was end to end after that, DLR still saw most of the ball but were kept at bay by Mahon while Sligo countered effectively to create some big chances.

Emma Doherty's strong effort bounced down off the crossbar while Paula McGrory's follow up was blazed over. McGrory found herself in on goal soon after but her attempt went narrowly wide of the left post to keep things level.

DLR proved the more clinical in the end. Substitute Kate Mooney timed her run into the box so that she could head home from a corner to hand DLR the lead on 80 minutes while a late McGuinness chance at the other end was hit right at Eve Badana to see Waves earn a well needed three points.