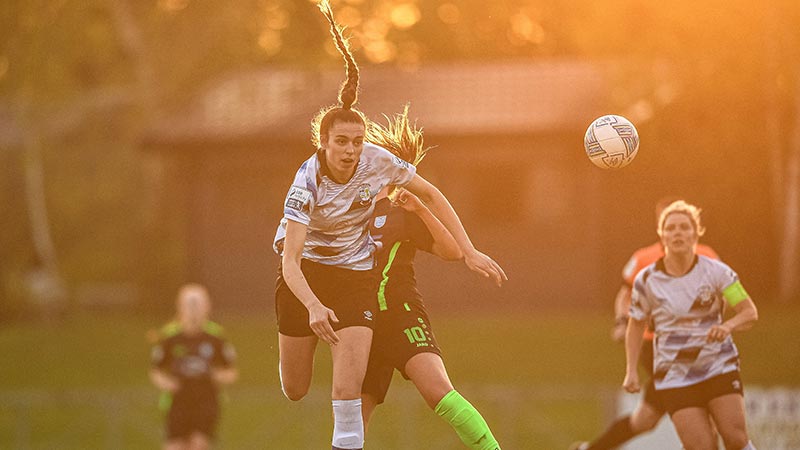 Athlone managed to pull off the upset after going to Belfield tonight and beating DLR Waves 1-0.

Chances were at a premium in this one and neither side really had many clear cut ones. It took a Niamh Prior own goal in the 57th minute to decide it.

You’d be forgiven for thinking in the opening ten minutes that this could be an action packed game. Athlone had a trio of corners in the 2nd minute, but to no avail.

Five minutes later a wayward pass in midfield from DLR sent Gillian Keenan through on goal. With a defender breathing down her neck, she had a crack at goal. It was at a favourable height for Eve Badana though and she palmed the shot away.

From here on out for the rest of the half however, there was very little action. The closest DLR came to scoring all game really came in the 41st minute, when a Sarah McKevitt cross took a ricochet in the box and both Orlagh Fitzpatrick and Katie Malone got shots off, but the pair were both blocked.

The second half started in quiet fashion as well, with no real chances coming in the first ten. It would take a little bit of luck for either side to break the deadlock.

In the 57th minute, Athlone won a deep free that did not seem threatening. Kelsey Munroe swung it into the box nevertheless and DLR dealt with it poorly, allowing it to bounce in the box.

Badana came to claim it but Niamh Prior got the vital touch, sending it into her own net whilst trying to ensure Kayleigh Shine didn’t get to it. A bit of luck, but Athlone won’t care.

DLR lacked serious urgency the rest of the way, failing to get any clear cut chances or even pepper the Athlone box whatsoever. They made a triple sub in the 73rd minute to roll the dice, but this didn’t inject any life into them.

Athlone could’ve wrapped it up in the 75th minute when a long ball found Emily Corbett and she got a run through on goal, getting to the ball before Badana but sending her shot wide, failing to repeat her heroics of Saturday. A missed chance that could’ve let the Waves back into it.

They failed to press on however. Athlone hang on for the upset win, earning their third victory of the season.