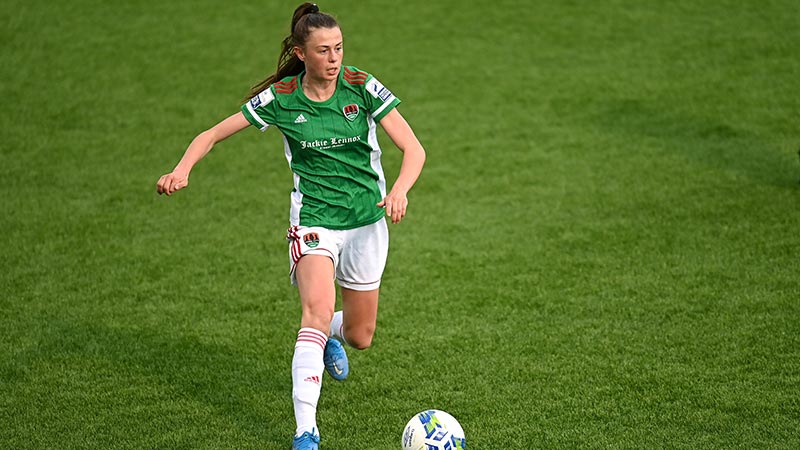 Cork City eased to victory as they defeated Munster rivals Treaty United 4-0 at the Markets Field this evening in the SSE Airtricity WNL.

The home side had a good spell early on but failed to take charge and Cork were utterly dominant for the remainder of the 90. A first-half brace from Eva Mangan and a second-half brace from sub Lauren Singleton saw City stroll to a deserved win.

Treaty looked the stronger side early in the game, opting for a long ball strategy to bypass the City midfield and split their defence.

The tactics payed dividends when left-back Amy Madden played a great ball from her flank to striker Shannen O'Donovan, who was bundled over to win Treaty a well-positioned free outside the Cork area.

Striking partner Heidi O'Sullivan came close with the following free, hitting low to the right only to be saved by the Cork keeper Hannah Walsh.

The Limerick side continued to play in the opposition half, winning successive corners, the latter headed over by Jesse Mendez as the Shannon-siders came close again.

The home team persisted with the long balls and it was a case of fine margins as O'Donovan was left to chase passes measured just too long for her to get in on goal while she also found herself offside on several occasions as Treaty couldn't make the most of their dominance.

At the other end, Cork came back into things after the 20th minute and Eva Mangan had her long-range effort shoved away by Treaty goalie Michaela Mitchell.

Cork kept the pressure on and after Mitchell failed to grasp a ball in her box the visitors put Treaty under siege with several attempts.

Captain Becky Cassin beat two defenders from the right to shoot and had her effort deflected out to Eva Mangan, who's powerful strike went low to the right past Mitchell to put the Rebels up 1-0.

Less than 10 minutes later Mangan had her second after some brilliant Cork play, Nadine Seward playing Mangan in for her to curl her shot into the far left corner.

Treaty struggled to get out of their area as Cork won their kick-outs and any balls played forward found attackers offside although Mitchell made a couple of good stops to keep the deficit to two before half-time was called.

Four half-time changes for Treaty made no impact as Cork continued to control play, preventing Treaty from exiting their half and nullifying their attempts to go long by playing a high-line at the back, which resulted in several more offside calls against the home team.

It was a Cork substitute that made a big impact in the second-half, Lauren Singleton causing mayhem from the left-wing upon her entry to the game before the hour mark.

Shortly after she had her first goal when she was bundled over in the box by Shannon Parbat and stepped up to bury her penalty to make it 3-0 to the visitors.

With Cork continuing to dominate, Singleton was to score again when she beat her marker and volleyed into the Treaty goal on the 77th minute to seal her sides' 4-0 win, Treaty unable to offer much in return as they tried to get a consolation score in the final 10 minutes.

Aoife Cronin had a decent chance to make it five in the 94th minute but went wide as Cork jumped to 6 points in the WNL as Treaty fell to seven straight defeats in the WNL.