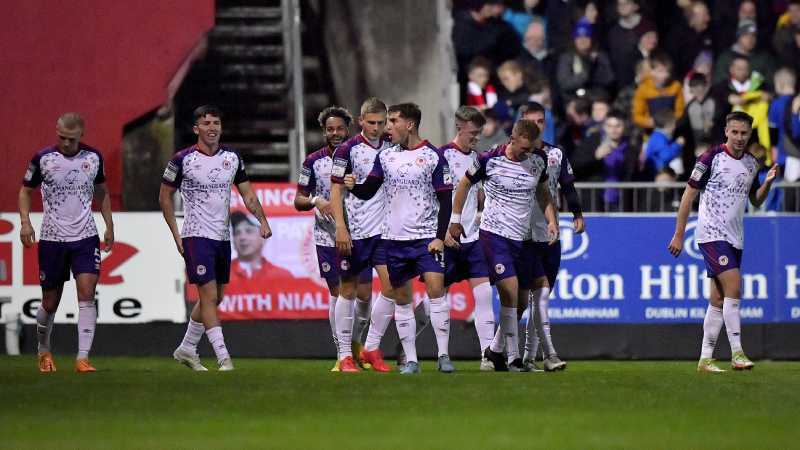 St. Patrick’s Athletic rounded off their league campaign in style with a Dublin derby demolition over Shelbourne at Richmond Park.

A brace from Eoin Doyle, a well took effort from Anto Breslin, and a lovely Ben McCormack goal capped off a fine 4-0 performance.

A buoyant and celebratory St. Pat’s crowd were treated to the perfect first half of football. Ben McCormack, Anto Breslin, and Eoin Doyle were instrumental throughout the first half and all combined for the first goal. Breslin and McCormack played a one-two which freed Breslin down the left whose first time cross was delivered perfectly and landed right in the stride of Doyle who passed home to make it 1-0.

It didn’t take long for the hosts to double their lead when Breslin dug a cross out from the left-hand side that landed perfectly again on Doyle’s head this time that was headed back across goal and the helpless Brendan Clarke.

Sean Boyd had efforts for the visitors that were well dealt by Saints shot-stopper David Odumosu. As the first half wore on, numerous Shels players all received yellow cards. Mark Coyle was joined by Jack Moylan and Boyd in the referee’s book whilst Tom Grivosti went in for the hosts.

The booking for Moylan may have been the reason he was substituted on the half-hour mark with the cup final Sunday week. It went from bad to worse for Shels when Doyle pounced on a Gavin Molloy error at the back, before holding the ball up and slipping Breslin in on the underlap who made no mistake as his first-time effort flew past Clarke and into the far corner to make it three.

Club captain Ian Bermingham made his final appearance for St. Pat’s at half-time as he replaced Anto Breslin, and the long-serving member was met with a rapturous reception by the Inchicore faithful who produced a brilliant pyro and tifo display.

Both sides made a flurry of changes throughout the second half. It definitely had the feeling of an end-of-season fixture as both sides looked to knock it about. Odumosu had to get down well on an occasion or two to maintain his clean sheet. McCormack and Cotter both had efforts from distance that didn’t trouble Clarke.

Just as the game was drawing to a close, McCormack who had a fine performance rounded Clarke before slotting home to make it four. There was just about time for Bermingham to receive a standing ovation and guard of honour as he was replaced by Mark Doyle.

It finished 4-0 and the Saints can go into next season with ambitions of wrestling the league title from Shamrock Rovers, whilst for Shels it is a big day out at the Aviva Sunday week against Derry.