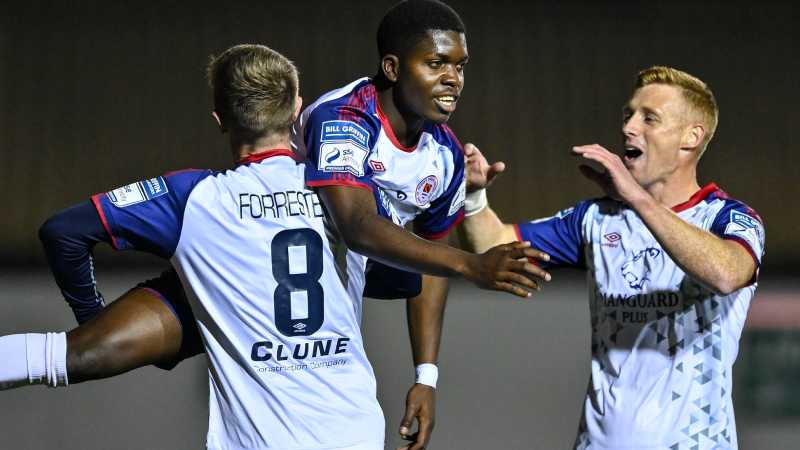 St. Patrick’s Athletic kept up the pressure on Dundalk in the race for Europe with a dominant 3-1 derby win at home to Bohemians

Goals from Serge Atakayi, Mark Doyle, and Tunde Owolabi wrapped up the three points for the Saints who proved too much for their north Dublin rivals.

Both sides made two changes each from their last respective outing last Friday night. Harry Brockbank and Jamie Lennon were brought back in, in replace of Thijs Timmermans and Tom Grivosti for the hosts. James McManus and Conor Levingston replaced Jamie Mullins and the suspended Jordan Flores for the visitors.

It didn’t take long for the derby to spring into life when Serge Atakayi pounced on an Eoin Doyle flick on, to outpace Rory Feely before racing in on goal and slotting it past Tadgh Ryan to make it 1-0. The hosts buoyed by the goal, knocked it about well with confidence looking to add a second.

They were forced into an early change however when Jamie Lennon went off injured after 15-minutes and was replaced by Timmermans. It didn’t take long for the substitute to make an impact when he was immediately brought down by Bohs captain Conor Levingston who received the first yellow of the game.

The visitors grew into the game more and created half chances through James Clarke and Declan McDaid who looked threatening, but Cotter down the right was proving too powerful for Murphy who couldn’t deal with the on-loan Rover’s man pace and power.

The away side’s best chance of the first half came from a free kick which resulted in a yellow card for Sam Curtis right on the edge of the area, but Clarke’s effort could only be deflected out for a corner. Jordan Doherty also had an effort that whistled past the far post.

Mark Doyle was brought on at half-time in replace of Harry Brockbank and the winger made an instant impact when he got on the end of a brilliant Forrester pass to slot it past Ryan and in off the far post to make it 2-0.

St. Pat’s had numerous efforts to put the game to bed through Forrester and Mark Doyle, but it was the visitors who pulled one back out of nothing, when James Clarke who was the visitors best player, curled the ball into the top corner from 25-yards out with seven to play.

However, any slim chance of the away side grabbing a second were put to bed in the 87th minute when another substitute, Tunde Owolabi saw his long-range effort beat Ryan to make it 3-1.

The game finished 3-1 and the hosts now move onto a monumental derby away to Shamrock Rovers next Friday night which could have a massive impact on the title race and that final European spot, while the Gypsies host Finn Harps.