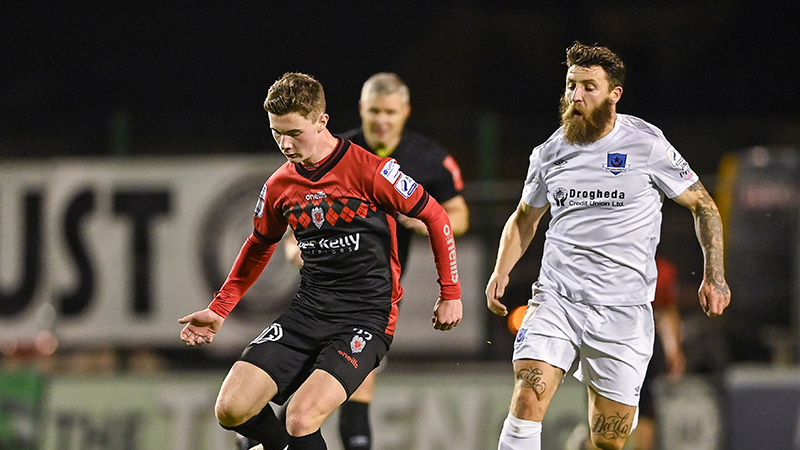 The win is the side’s first league win since mid-August, ending a run of four league games without a win.

The hosts started well and looked dangerous in the opening stages with winger Kris Twardek constantly getting down the right-hand side and delivering good crosses that couldn’t be steered past Colin McCabe.

McCabe was called in to action when James Clarke had an effort that he had to push away. However, the visitors grew into the game after 15 minutes when they began to create their own half chances.

First, Darragh Markey who was at the heart of everything the visitors did well in the first half, had a left footed effort that Tadhg Ryan had to parry away. Markey found himself in a nice position moments later 25-yards out, but his wayward effort went safely over the bar.

Adam Foley was next to have a pop for the away side, but his effort from outside the area went just wide of the post. Twardek tried to do his best with more crosses into the box, but the home side hadn’t any runners from midfield arriving.

The hosts next big opportunity came when Ciaran Kelly played a lovely pass over the top, beating Keith Conan in the air, which fell to Ethon Varian who controlled well, however he opted not to shoot, and the opportunity was eventually squandered.

The visitors then had two free kicks in quick succession yet failed to test Ryan. Bohs captain Jordan Flores was first to be booked and he was quickly followed by teammate Kelly. The last decent chance of the first half fell to Adam Foley who done very well to win his flick on and knocking it past Kelly, before firing the ball just past the far post.

The second half sprung into life when Jordan Flores was booked for a second bookable offence following a tackle on Darragh Nugent with 70 minutes gone on the clock.

A flurry of substitutes from both sides really disrupted the tempo of the game, with the visitors struggling to create anything clear cut.

When the game seemed to be heading towards a stalemate, in the dying embers, substitute Dayle Rooney controlled the ball inside the Bohs penalty area before volleying home into the near corner with a great strike.

In truth, it was a poor showing from the hosts apart from the opening stages of the first half, who looked flat and seemed to lack confidence. It went from bad to worse with the sending off.

Drogheda now move onto league leaders Shamrock Rovers next Sunday week, whilst Bohemian’s move onto a Dublin derby next Friday evening, when they travel to Inchicore to face St. Patrick’s Athletic.