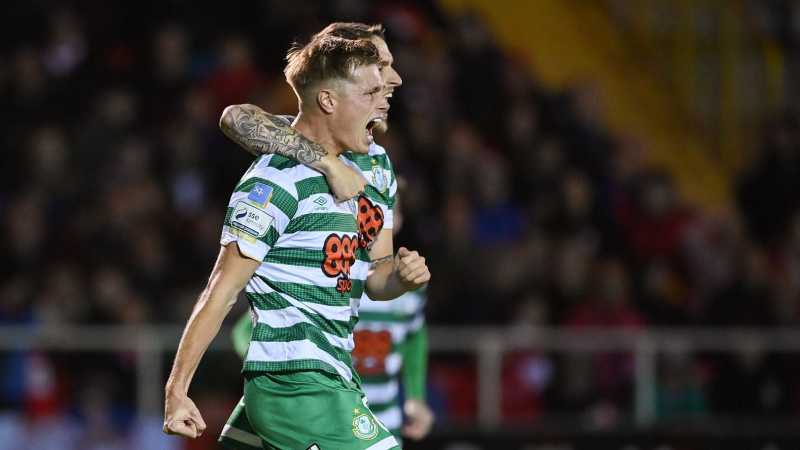 Shamrock Rovers continued their challenge for the league title with a 3-1 win over Sligo Rovers this evening.

The Hoops were in control throughout the tie and deserved their three points this evening, Sligo unable to contain a lethal front three.

Goals by Daniel Cleary and Dylan Watts had them comfortable at the break before Graham Burke netted the third, Nando Pijnaker pulled a consolation back for Sligo minutes later.

The Dubliners began the half like they would play it for the remainder, in total control Jack Byrne had their first effort at goal after five minutes but he just could not set himself yards from the goal line, Rory Gaffney could have made it 1-0 minutes later but Richard Brush made a great save to deny Gaffney on his fourth start of the season.

It took just 15 minutes until the Bit O’Red’s defence was exploited, a clearance fell to Sean Kavanagh on the left-hand channel, his inviting cross was met by the head of Daniel Cleary, whose header flew into the back of the Sligo net.

Gaffney and Graham Burke came close to adding the second, but neither could find the mark. Watts created space after the half-hour mark but three red shirts swarmed him and a blocked effort was gathered by Brush.

Watts would find the net after Byrne was precise with a through ball that cut the Sligo defence open, Rovers turning defence into attack at the blink of an eye with Kavanagh again involved in the build-up play.

Appeals were made just before the break by Sligo for a handball in the Hoops area, Max Mata the man to strike at goal but the arm of Cleary looked to have struck the ball on its flightpath.

Into the second half Sligo continued to press but Pijnaker only found the chip van behind the goal as his effort was wayward. Burke came close to making it 3-0 but Brush saved well to keep it at 2-0.

Burke was unlucky with his chances, but a Gaffney cross after 70 minutes warranted him his goal, free at the back post to tap into an empty net.

Pijnaker did make it 3-1 after 74 minutes, he was on hand to convert from a Kailin Barlow freekick. Shamrock Rovers continued to press shortly after with Brush doing well to deny Watts just before the end of normal time.