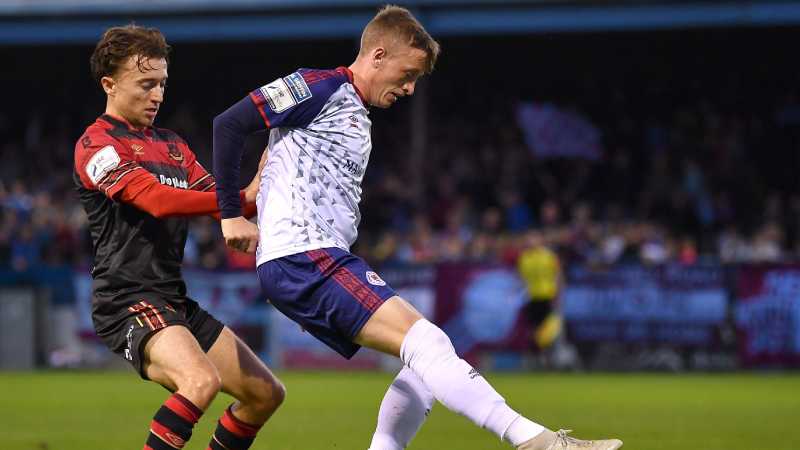 The only goal of the game came in the 70th minute; a free-floated into the box was nodded on by Joe Redmond and powerfully headed home by substitute Mark Doyle.

Eoin Doyle also had a penalty saved by Drogs keeper Colin McCabe in the sixth minute and Anto Breslin received a straight red in the 23rd minute. Chris Forrester made it 2-0 late on from the spot.

It was a first half of few chances but there were some talking points. In the fifth minute Evan Weir was adjudged to have handled the ball in the box from Serge Atakayi’s shot. It looked extremely harsh on the defender. Up stepped Eoin Doyle but Drogs keeper Colin McCabe brought off an excellent save.

Atakayi hit a shot that McCabe saved in the 13th minute. Pat’s were on top but Drogs were able to hold them with McCabe solid in between the posts.

Pat’s were reduced to 10 men in the 23rd minute when Anto Breslin was sent off after he reacted to a foul by Luke Heeney. It was harsh on the defender.

The home side began to come more into the game. Darragh Nugent had their best chance of the half in the 35th minute but his drive just went inches wide.

Eoin Doyle should’ve done better with his effort in the 51st minute after Atakayi played a low ball into the box. Dayle Rooney brought a fine save out of Pat’s keeper Danny Rogers in the 56th minute.

Down the other end Atakayi put his effort over the bar in the 61st minute. Eoin Doyle also had a chance minutes later but the deadlock was finally broken in the 70th minute by former Drogs player Mark Doyle.

Cotter had to turn Adam Foley’s cross over his bar in the 82nd minute as Drogs went in search of an equaliser. In stoppage time substitute Owolabi was fouled and Forrester put away the penalty.