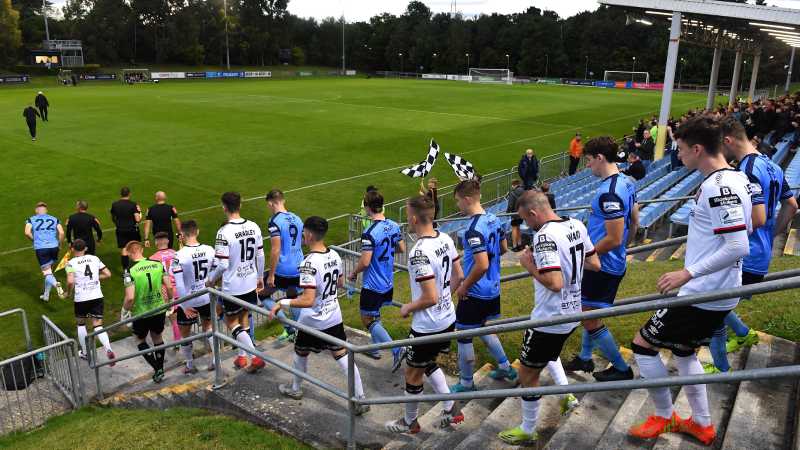 UCD AFC came from behind twice and snatched a late winner to earn a valuable win at home to Dundalk this evening at the UCD Bowl.

Dundalk started the strongest and were far more confident on the ball. The first chance of the game came through David Mc Millan who charged at UCD's defence after a through ball from Lewis Macari, darting towards the byline his effort was drilled into the side netting. Early on UCD struggled to retain any possession of the ball and lacked the confidence to stamp their authority on the game. Sensing this Dundalk pushed high to press the Students’ back line.

However, the threat of Thomas Lonergan was noticeable when minutes later there was a penalty appeal for UCD. Lonergan was brought down in the area after a tussle with Andy Boyle. The referee disagreed with the roaring home fans and gave Dundalk a free out, a controversial decision to say the least!

Keith Ward was impressive for the Lilywhites and found plenty of space between the UCD midfield and defence. He controlled proceedings by spraying passes out wide and allowing the wide men of O’Kane and Bradley to exploit their side's height advantage by delivering several crosses into the UCD box. This culminated in an excellent chance at the half-hour mark. Ward found Leahy with plenty of space on the left-hand side who delivered a perfectly accurate cross which found the head of David McMillan. The forward was under significant pressure but managed to direct his effort goalwards which sailed narrowly over the bar.

Dundalk did not have to wait much longer for a breakthrough, however. A darting run infield from Steven Bradley had the UCD defence panicking. After beating several players Michael Gallagher collided with the Scottish winger to earn a freekick in a very dangerous position. Up stepped a confident Keith Ward who placed the freekick nicely into the top left-hand corner.

The second half started much the same as the first, but UCD managed to pull one back. Dara Keane slotted the ball neatly into the path of striker Thomas Lonergan who found space between the Dundalk centre-backs and slotted it home into the bottom right corner.

The College’s lead was short-lived though, this time Steven Bradley was the scorer after he completed a Dundalk counterattack. Substitute John Martin managed to get the ball out of his feet and out to Bradley who evaded the desperate UCD defence.

The Student’s were undeterred and managed to once again equalise in the 78th minute. Thomas Lonergan showed his class with a backheel to Sean Brennan who charged at the Louth side's defence. He found Dylan Duffy to his right who showed great composure to pick out the Dundalk net.

For the final 10 minutes, Dundalk threw everything at the Students, but Andy Myler’s side remained steadfast and proved to still pose a threat on the counterattack. This threat soon turned into three points when Lonergan once again showed his class in front of goal after being set up by Dylan Duffy. The UCD crowd erupted beside a stunned Dundalk faithful.

This result lifts UCD off the bottom spot while this result means Dundalk lose valuable ground in the race to finish at least second in the Premier Divison. Next up for Dundalk is an FAI Cup Quarter Final trip to Waterford next Friday, while UCD travels to Limerick to face Treaty United in the same competition.