Shamrock Rovers and Derry share spoils at the Brandywell 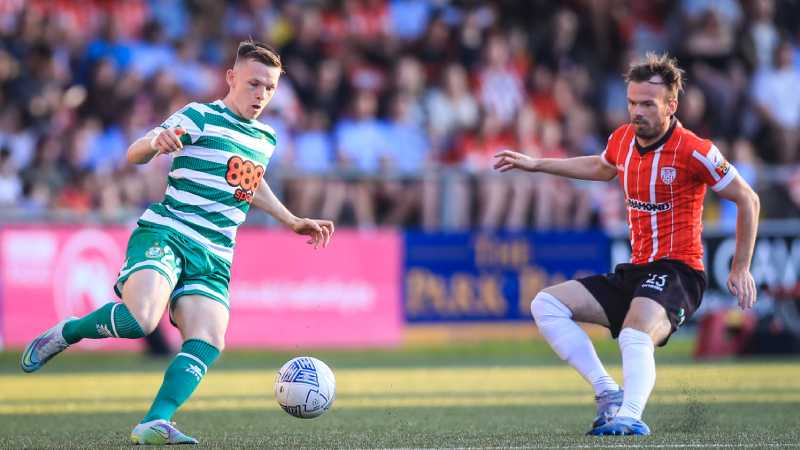 League leaders Shamrock Rovers maintained their eight-point advantage above Derry City as they held the Candystripes to a goalless draw in a, nonetheless, enthralling encounter. Dundalk's win however takes them within four points of Shamrock

The first half seesawed as the Brandywell crowd made for a raucous atmosphere early on. Sean Hoare’s flicked header wide from Neil Furrigia’s cross their best chance amidst concerted pressure.

Given the recent soaring temperatures, water breaks were in play tonight and following the first, Derry sprang into life attacking Shamrock in waves.

With thirty-seven minutes played, Hoare was adjudged to have handballed from a Derry free kick and the referee pointed to the penalty spot. Will Patching, passed fit to start, stepped up but sent an uncharacteristically tame effort to Alan Mannus’ left. A miss that let Shamrock off the hook.

Despite Jack Byrne’s arrival into the game as a substitute, clearcut chances remained at a premium. Indeed, Sean Kavanagh’s pearoller at Brian Maher’s was one of Rover’s better openings.

The home side scented blood and with Michael Duffy’s introduction, Mannus was forced into another sprawling stop.

Captain Patrick McEleney then engineered a golden opportunity for Ryan Graydon, but the winger’s shot hit the post from a narrow angle.

Despite a late surge, encouraged by the buoyant Brandywell crowd, a couple of flashing headers just wide from Cameron McJannet were the closest Derry came to snatching victory.

The visitors, despite the dropped points, will leave the happier of the sides considering their point tonight was a very hard-earned one. It rounds off a satisfying week’s work having also secured group stage European football for the near future.

While Dundalk’s win at Dalymount Park elevates them to within four points of Rovers, Derry are now languishing eight points adrift of the leaders.

Tonight’s results have teed us up for a mouthwatering clash between Shamrock and Dundalk next week. Derry will hope to get back to their goalscoring ways against Drogheda at the same time.