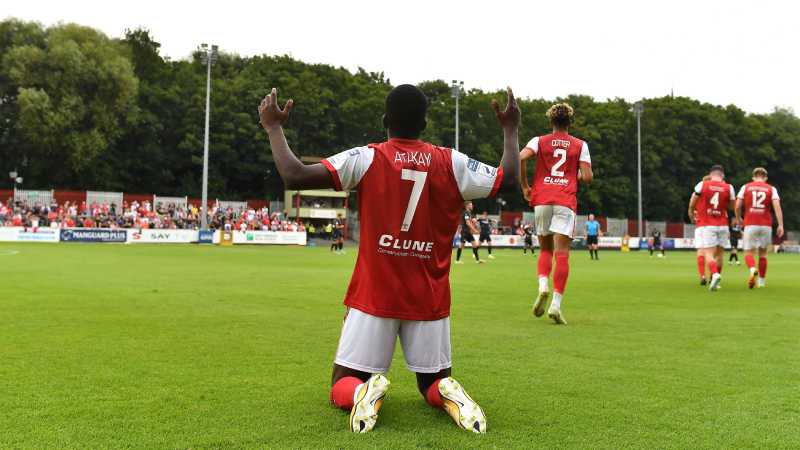 Serge Atakayi was the difference as St Patrick’s Athletic picked up a valuable three points in their pursuit of European action next season, edging out a tight contest with Sligo at Richmond Park this evening.

It might have been fortuitous but Pats will leave happier, now four clear of Sligo in the table, a defensive mistake cost them, Pats holding on despite having ten men on the field with Mark Doyle sent off in the second half.

Sligo will be disappointed as they failed to hit their chances, with a man advantage they just failed to test the Pats defence and snatch something late on.

Both goalkeepers were tested early Will Fitzgerald forced new signing Danny Rodgers into making his first save for Pats, minutes later Serge Atakayi broke clear, but his effort was straight at Luke McNicholas.

It was a tight half as both teams had chances but neither could find a killer touch, possession-based with both defences doing well to clear danger before it developed into a goal.

After the half-hour mark Pats got their bit of luck in the tie, Eoin Doyle played in Atakayi to chase down the ball going into the Rovers area, Shane Blaney collided with McNicholas in the build-up, allowing Atakayi to roll home into an empty net.

Pats continued to press with Doyle and Anto Breslin coming close but neither could add to their lead, they held firm to take the lead to the break, deserved in the grand scheme of things luck on their side but they won't mind.

Sligo threatened early in the second half with Shane Blaney having a free kick from close range just over the bar, Sligo had looked strong at the end of the first half but could not come close, Blaney was the closest they came to date.

The Bit O Red worked their build-up play well as Robbie Burton linked up with Paddy Kirk, he played a lovely reverse pass to Niall Morahan he shot from range but Rodgers saved well to push it out.

A turning point came after 64 minutes, Mark Doyle was shown a straight red card for a dangerous high foot challenge on Paddy Kirk, no debate needed as his boot collided with the head of Kirk leaving him needing attention.

It looked like Sligo had struck back immediately after the red card, Nando Pijnaker heading across goal with Lewis Banks going close as his header fell just wide, Adam McDonnell tried his luck from range but his effort was saved, Banks tried to score from the follow-up but it went over.

Atakayi found himself on the end of another blunder by Sligo in the 76th minute, again he had the goal at his mercy but from a tight angle his effort went wide of McNicholas, huge let-off for the visitors as they had been all over Pats falling short in the goals department.

End to end stuff late on as Tunde Owolabi had a shot that failed to test McNicholas in the goal, while at the other end Rodgers worked hard on his debut as he made a smart stop to keep the game in Pats favour.