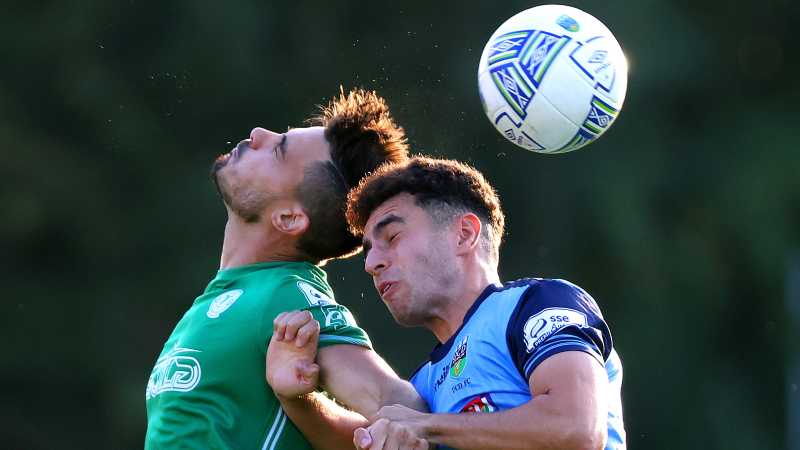 Evan Caffrey hit a wonder strike as ten-man UCD came from behind to record a crucial win over Finn Harps this evening at the UCD Bowl.

It's a win that sees them leapfrog Harps in the table as the relegation battle takes another twist, a dramatic tie action at both ends but the students will leave much the happier having taken their chances well.

Harps had led early but just minutes later UCD were back in the tie, tempers flared in the second half but despite finishing with ten men the students hung on for a valuable three points.

Both threatened early but it was Lorcan Healy who was the busiest of the keepers, he was on hand to save from Filip Mihaljevic, his header from a Regan Donelon cross was straight at the net minder for a comfortable save.

Mihaljevic would see the net ripple minutes later, however, Dara Keane was penalised for a foul inside the box, the referee pointed to the spot and the big forward made no mistake sending Healy the wrong way for an early lead.

Just minutes later UCD were level, James McKewon tipped a shot from Keane onto the post, the follow up from Donal Higgins worked wonders, a smart poacher's finish saw them back on level terms, Harps would feel like it came from absolutely nothing.

Sam Todd and Mark Dignam both had chances to put the students ahead, while at the other end Eric McWoods fired just over the bar, the Harps keeper was needed to be at his best late in the half for a crucial stop to keep it level, as neither could be separated at the break.

Tempers flared early in the second half, very few chances but Jack Heaney was carded for a challenge which saw the captain taken off, Keane was shown a second yellow card for a coming together with Conor Tourish, he looked to have elbowed the Harps man as they were down to 10 men after 52 minutes.

If anything the man advantage for Harps did not phase the students, six minutes after the red card they would find the net to lead for the first time, Evan Caffrey struck an effort from range which flew past McKewon into the back of the net, a huge goal for their relegation hopes, but a sensational strike from the third generation UCD player.

Harps pressed but failed to create a chance to warrant a goal, UCD had chances to put a third past the Donegal side but great defending and goalkeeping saw the game end 2-1. Plenty of heart by the ten man Dublin outfit in Belfield.