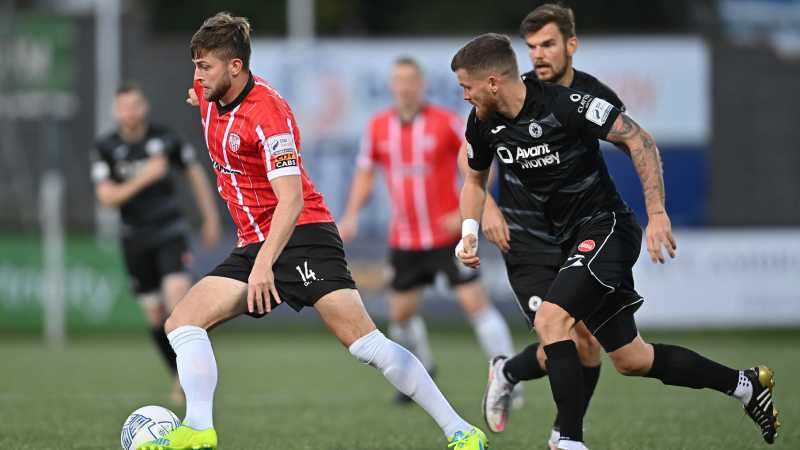 A dominant Derry City dented Sligo’s European aspiration whilst also keeping apace atop the Premier Division standings, as they edged a bitty contest, 1-0

Will Patching was the matchwinner for the Candystripes. Patching’s peach of a free kick in the fifteenth minute enough to see off a disapprovingly tame Sligo Rovers.

Derry dominated but Ryan Graydon spurned their first opportunity as his header from six yards out, after sumptuous play by Cameron McJannet, flew wide.

It was soon forgotten however as the hosts early pressure yielded the lead. Robbie Burton, who was sloppy at times, conceded a cheap free kick in prime Patching territory.

From the left edge of the D, the midfielder curled in a beauty. A trademark top corner strike, another example of Patching’s party piece.

The lively Michael Duffy and Cameron Dummigan came close to doubling Derry’s advantage before Sligo emerged out of their shell.

Paddy Kirk purposefully pushed up from left-back and his delicious cross needed the intervention of Brian Maher’s fingertip as top scorer Aidan Keena lurked for any loose ball.

Jamie McGonigle thundered a fizzing volley just high after the break before Graydon guilted another header, this time from Duffy’s wonderfully wafted cross.

As the clock ticked down, the nerves steadily increased in the Brandywell. Defender Mark Connolly, however, was immune to any anxiety as he made a series of brave blocks & intelligent interventions. He looks increasingly a steal of a signing from Dundalk & was a calming presence.

In injury time, Danny Lafferty made his centurion, 100th appearance for Derry. Yet it was one of Sligo’s subs, Max Mata, who nearly pooped the party in the 94th minute.

Keena weighted an ingenious chip in behind Derry’s backline but from a tight angle, Mata could only lift high. Seconds later, the whistle went, to cue delirium.

An important result for both sides as Derry maintains the pressure on Shamrock, their breathing down their neck in the league only adds to an already enticing FAI Cup quarter-final with them on Sunday.

Sligo, meanwhile, must ponder why they sat so deep, despite possessing a formidable attack, until the 1st of October when they welcome, whom other than, Shamrock Rovers themselves.

Derry will pray that Keena, Mata & Frank Livaak get more chances that night than they did on tonight’s tricky trip to an inform Northwest team.