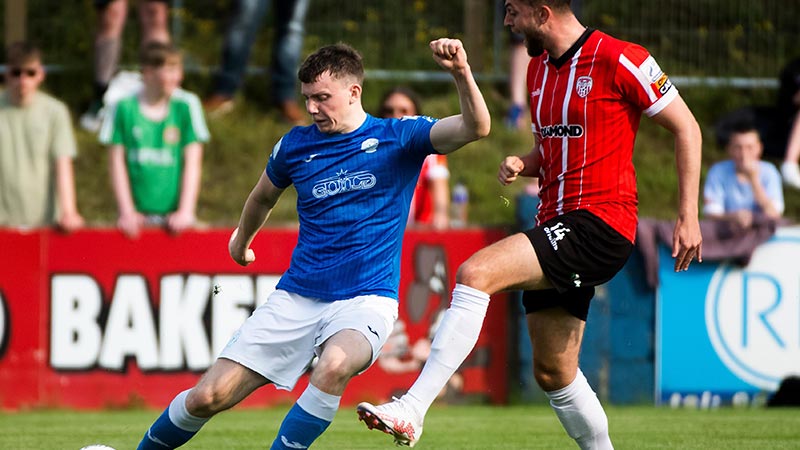 Derry City went second in the Premier Division as James Akintunde bagged an injury time winner in the Northwest Derby.

Trailing to Robert Jones’s first half header, the Candystripes transformed the game as two substitutes scored. Ryan Graydon levelled with ten minutes left before Akintunde forced the ball home to cue pandemonium amongst the away fans at Finn Park.

Both teams were desperate for three points tonight, yet the first quarter was uneventful, a Matty Smith zinger the nearest thing to a goal.

When a goal did come, it came via a set piece. Regan Donelon delivered and Robert Jones, bizarrely left unmarked by Derry, thundered a header past Brian Maher to send Finn Park wild.

Ruaidhri Higgins made a double change at half time including the introduction of new signing, Sadou Diallo. Yet as Harps dropped deeper and Derry monopolised possession, the Candystripes still trailed.

Ryan Graydon, another summer signing, had an immediate impact on his arrival but mis controlled the ball at the key moment. Graydon’s pace against a robust Harps defence saw all the home defenders collect bookings.

As Ollie Horgan’s side became more and more reliant on superb individual, last-gasp tackles, Derry were in complete control and finally equalised.

Ironically, it came via the direct style. Cameron Dummigan’s hoof up field went uncontested and Graydon gleefully nipped in, stooping low to head past Mark McGinley, his first goal for the club.

McGinley was keeping the hosts in it as moments ago he had brilliantly repelled Patrick McEleney’s long-range rasper.

Having levelled, Higgin’s troops continued to push forward. And they got their rewards in injury time. Will Patching floated the ball into the mix and Akintunde, making a menace of himself in the box, reacted instinctively to prod past McGinley and cue bedlam in the away end.

Having also denied Harps victory in injury time at the Brandywell, the Northwest Derby bragging rights rest, for now, with Higgin’s team.

A huge win for Derry, they now sit a point above Dundalk in second place, have emphatically bounced back from their European elimination and this success is their third straight away win in the league. They host Sligo on Friday, in formidable form.

For Finn Harps, the contrast with Derry’s delight will be raw. UCD’s win at Sligo rubs salt in the wound and moves the bottom two teams’ level on points. They have another tough test next, travelling to Dundalk.

Things are certainly heating up in the Premier Division this summer.