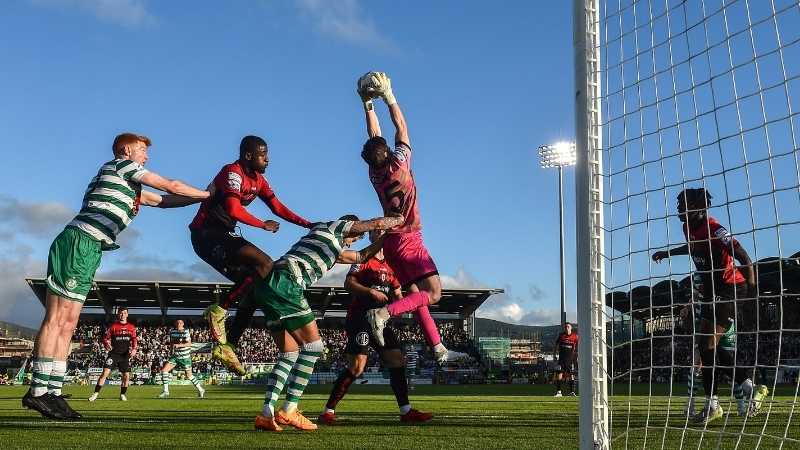 Rory Gaffney netted the only goal of a tense Dublin derby at Tallaght Stadium this evening.

The striker scored just after half-time to give Rovers a big win and bounce back from last Friday’s defeat away to Dundalk.

Both sides made changes from their previous outings. Richie Towell and Ronan Finn dropped out for Rovers, with Lyons and Greene coming in to replace them. It was just the one change for the visitors as Ciaran Kelly was replaced by Rory Feely.

It was the visitors who shaded the opening 20 or so minutes. They seemed to settle the better and looked threatening in behind with Omochere and Uzokwe causing problems. The home side came back into it however, with good strikes from Daniel Mandroiu but nothing to trouble Ryan too much between the sticks.

The visitors best chance of the first half came through Liam Burt who blasted a cut-back from just inside the box well over the bar.

The second half sprung into life right from the start.

Rory Gaffney opened the scoring two minutes after the interval. A corner to the back post fell to the striker, and he stabbed home from two yards out which erupted Tallaght Stadium. The striker had missed a gilt edged chance right after the restart which led to the eventual corner that the champions scored from.

They went close again when Mandroiu struck the crossbar from a header after a good pick out by Gaffney. It was a high-octane Dublin derby as tackles flew about with yellow cards being dished out to both sides.

Bohs huffed and puffed in patches and went closest when an Omochere flick on from a corner couldn’t be poked home at the far post by Uzokwe.

It is a big result for the hosts as they bounce back from last Friday’s defeat away to Dundalk. For Bohs, it is a disappointing result as they played well during a lot of the game.

Shamrock Rovers travel to Inchicore for another Dublin derby on Monday when they visit St. Patrick’s Athletic. Bohs host Derry City next Friday night at Dalymount.