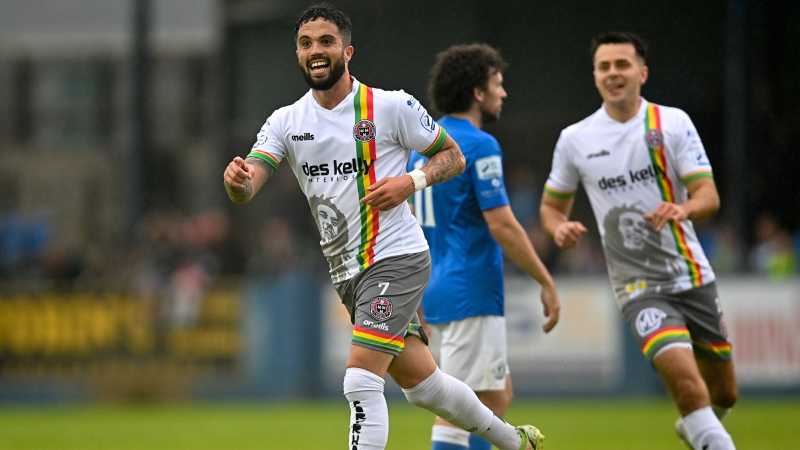 Goals from Declan McDaid and Jordan Doherty were the difference between Bohemians and ten-man Finn Harps as the visitors defeated their hosts by 2-0 at Finn Park this evening.

Harps failed to take advantage of the numerous chances they created in the first-half and a mess at the back saw McDaid head in a Kris Twardek cross on 53 minutes.

A second booking for Ryan Rainey saw the home side fall to ten men with 15 minutes remaining and Bohs began to find space.

Chris Lotefa picked out fellow substitute Jordan Doherty wide open and the defender shot into the top-right corner to double the visitors' lead on 83 minutes, leaving Harps to linger at the bottom of the Premier Division.

Bohemians had the better share of possession in the opening half but failed to seriously trouble the Finn Harps goal with talented attackers like Junior Ogedi-Uzokwe and Liam Burt out injured.

Harps relied on the break to threaten and had opportunities to take the lead as they moved forward from the right through the combinaton of Gary Boylan and Ryan Rainey.

Eric McWoods offered himself as a reliable targetman for the home side and he set up the first big chance of the game when he found Filip Mihaljevic from the endline but the Croatian took the ball too wide and his shot was blocked.

More good play by Harps from the right concluded with Jamie Siaj firing over soon after on his first start.
Mihaljevic had a shot on target for Harps on 35 minutes after Rob Slevin flicked on an Ethan Boyle throw-in but James McCracken dropped quickly to save though the striker was then ruled offside.

McWoods crossed from the right to Siaj moments later but the Jordanian again hit over after the ball bounced awkwardly before him.

Mcwoods would find Siaj in front of goal again early in the second-half but the striker's timid effort was easily saved by Jon McCracken in the Bohs' net.

Some nice attacking play by the visitors soon after created a scramble in the Harps defence and saw the home side punished for their failure to score earlier on.

Jamie Mullin's blocked cross fell to Jordan Doherty who's touch was cleared off the goal line by Mihaljevic. The ball, however, fell out to Twardek who crossed to McDaid and his header sent the Gypsies ahead.

Harps remained in the game upon conceding but Rainey's sending off made their task more difficult and Doherty's strike in the final ten minutes killed the home team's hopes.