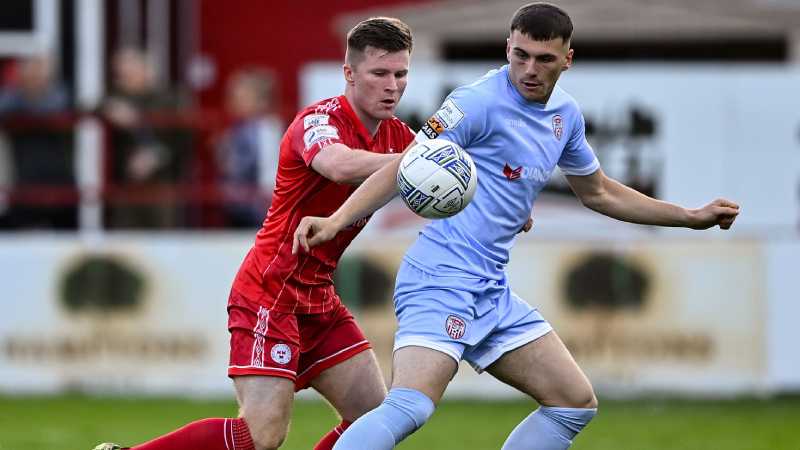 However, he was helpless to stop Graydon stealing a late winner at the death, with Ruaidhrí Higgins' side leapfrogging Dundalk into second after their other title rivals lost at Sligo elsewhere tonight.

It was a competitive, if unspectacular start by both – though the visitors could've scored after 35 seconds. Patrick McEleney curled an effort narrowly wide, in an early warning sign for the hosts.

Shelbourne had two half-hearted penalty appeals waved away in the first half, as Jack Moylan and Sean Boyd both went down in quick succession under physical but fair challenges.

JJ Lunney, the hosts' best player on the evening, tried his luck from distance while Brian McManus scooped an effort over before the interval.

Lunney made two big interventions just before the break as Derry's counter-attacking threat remained, largely powered by the quick feet and intelligence of James Akintunde.

Akintunde, who had a goal disallowed for offside in the first half, could've had a second-half brace.

The visitors were frequently dangerous in transition, Joe Thomson's low pass across the box for him just two minutes after the restart was weakly struck and Clarke made a comfortable save.

Then, a minute after Clarke was forced into an acrobatic stop to deny McEleney's latest curling effort, the 26-year-old could've broken the deadlock with marginally better reactions.

Cameron Dummigan's low ball ricocheted into his path, but as he shot, Luke Byrne's goal-saving sliding tackle in the six-yard area kept the scores goalless on 65 minutes. Given his timely contribution there, it feels somewhat cruel Byrne was to be involved in Derry's dramatic winner.

Before then, Graydon forced Clarke into a great save from point-blank range 15 minutes from time, after Gavin Molloy was the latest to cheaply relinquish possession and the winger marauded through midfield beyond Byrne and Kameron Ledwidge.

A succession of well-timed blocks saw Shelbourne hold on as Derry refused to let up, Cian Kavanagh heading over the crossbar from close range.

Shels were stung late on, but the goal had been coming. Graydon let fly, watching his speculative effort take a wicked deflection off Byrne to wrongfoot Clarke and nestle into the far corner.

Sean Boyd was sent off for an incident after the full-time whistle as frustration spilled over, though Higgins' pre-match comments expecting a tough game but for their individual quality to eventually shine through proved prophetic. Tough to take, but Shelbourne could have no complaints.