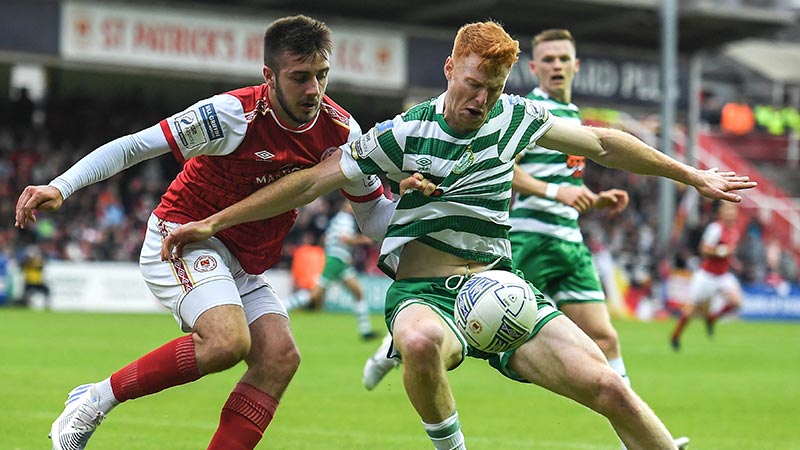 Shamrock Rovers produced a clinical display to overcome St. Patrick’s Athletic 2-1 at Richmond Park this evening, despite a late goal for the hosts.

Andy Lyons and Aaron Greene had put the visitors in cruise control until Eoin Doyle slotted away a penalty kick in additional time. The result rounds off a great weekend for the champions following Friday’s win against Bohs.

The hosts made just the one change after last Friday’s damaging draw in Ballyboffey. It was an enforced change as the injured Sam Curtis had to be replaced by Northern Ireland u21 player Jack Scott. The visitors made two changes from their derby day win over Bohemians on Friday. Sean Gannon and Chris McCann came in for Sean Kavanagh and Danny Mandriou.

It didn’t take long for the first chance of the game. Chris Forrester collected the ball on the edge of the Rovers box, he played a lovely ball into the feet of Billy King, but the attacking midfielder scuffed his effort, and the ball went over the bar.

Rovers grew into the game as the half wore on. Without creating any real clear-cut opportunities, Dylan Watts was providing some lovely crosses into the box that couldn’t force a goal. They went closest when Roberto Lopes flicked a Watts delivery towards goal. Anang spilled the ball, allowing it to dribble just past the post and out for a corner. It was almost a moment to forget for the goalkeeper as for a second it looked as if the ball was heading into the back of the net.

The Saints survived some Rovers dominance and created some more half chances of their own. Darragh Burns was operating effectively down the right-hand side and had the beating of Lee Grace. Eoin Doyle had an opportunity inside the Rovers box, although he seemed to lose his footing as he got his strike away, allowing Mannus to gather.

Rovers got their first when Greene and Gaffney linked up on the right-hand side. Gaffney set Greene before he looked for Gannon inside the box who mishit the ball, allowing Lyons to come in behind and rifle it into the roof of the net past Anang. This was after a good period for the Saints.

Pat’s responded well to the goal but failed to create any clear cut chances. They were made to pay as Rovers doubled their advantage 10 minutes later. Aaron Greene collected the ball on the left-hand side before nutmegging Jack Scott and taking it past Burns inside the box before striking the ball past Anang from the near post. It was all too easy for the Rovers striker as it was pretty dismal defending from the Saints.

Owolabi must’ve thought he had made an instant impact after he came on when he rounded Mannus but Lee Grace was on hand to clear the ball off the line. The striker then had a penalty shout waved away following a strong tackle from Rover substitute Barry Cotter.

Owolabi was at it again when he was brought down inside the penalty area in stoppage time. Eoin Doyle stepped up to send Mannus the wrong way and halve the deficit.

The result ended 2-1. St. Patrick’s Athletic move onto Drogheda at home on Friday, whereas Shamrock Rovers make the long trip up to Ballyboffey on Friday, when they visit Finn Harps.