Shamrock Rovers get back to winning ways in Tallaght 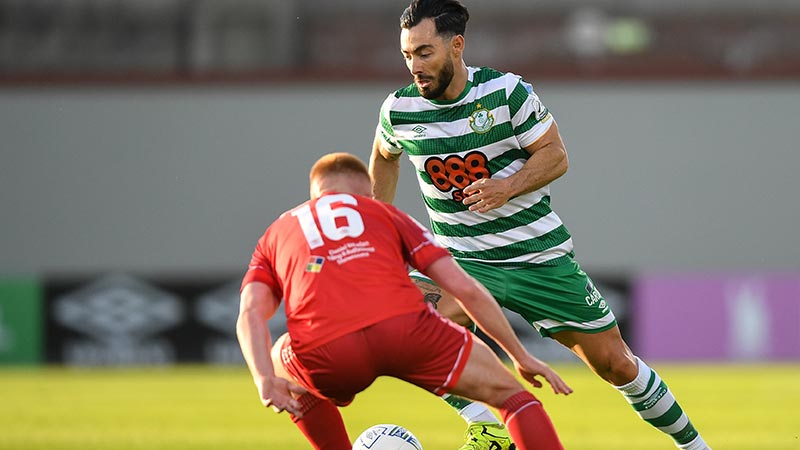 Shamrock Rovers got back to winning ways following their defeat on Monday night to beat Shelbourne 2-0 tonight at Tallaght Stadium in the Dublin derby.

An early Richie Towell strike topped up by a Rory Gaffney finisher ensured the three points for Rovers, who are unbeaten at home since August 2021.

The league champions got off to a blistering start after two minutes to take the lead.

Graham Burke collected the ball on the right-hand side before feeding Gaffney who was ahead of him. Gaffney looked up and delivered a cross that was left smartly by Dylan Watts and met by the oncoming Richie Towell who placed it into the far corner.

Shelbourne grew into the game after that, and chances were few and far between. The away side struggled to create any decent chances however to trouble Mannus.

Rovers got their second on the half hour mark when Lyons played it to Gaffney on the left-hand side on the box before the striker turned and got a powerful strike away into the near corner, which proved too powerful for Brendan Clarke.

Shels nearly got a slice of luck when Alan Mannus made a poor clearance that landed at the feet of Sean Boyd 30 yards or so out from goal.

The striker took a touch but just took that extra split second to steady himself before getting a strike away. However, Rovers did well to get a body in and protect any potential danger.

The second half was much of the same. The home side managed the game and didn’t need to get out of second gear in truth. Although, Shels created some half chances especially from substitute Kameron Ledwidge, they never came close to worrying Mannus.

It was quite a niggly affair with both sides putting in some late tackles on each other. In particular, Jack Moylan caught Sean Kavanagh late in the first half although he somehow avoided a yellow card. Kavanagh was on the receiving end of another bad tackle in the second half when Shane Farrell took a heavy touch and lunged into the tackle, perhaps lucky to only get away with a yellow.

Rovers cruised to victory and go into the League of Ireland break eight points clear at the top of the table following Derry City’s failure to beat Finn Harps tonight.