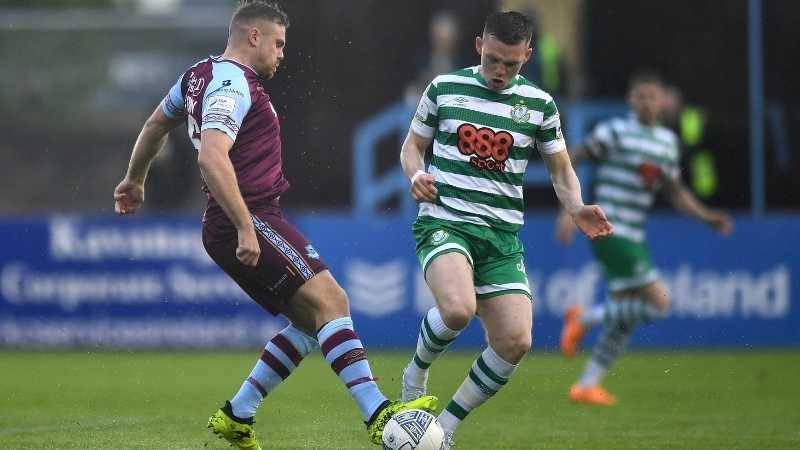 Rovers dominated possession and the chances as expected but Ryan Brennan’s header in the 36th minute saw Drogheda leading at the interval.

Despite the Hoops chasing an equaliser intensely, the home side defended commendably in the second-half and held on to get a huge result. Danny Mandriou’s second yellow with 10 minutes left didn’t help matters for Stephen Bradley.

Concentration and focus is how you can sum up this unprecedented victory for Kevin Doherty’s Drogs as they reach two wins on the bounce now. They were full value for their goal and proceeded to work incredibly hard to earn a great result.

To no surprise Rovers started off with purpose as Rory Gaffney and Ritchie Towell came close within two minutes. They were left scratching their heads when Sam Long magnificently saved Danny Mandriou’s free kick minutes later.

Despite being under reigns in the first half the hosts looked good when they had the ball and they played with real belief. They fouled smartly and managed the half well.

Hence when they took the lead on 36 minutes through top goal scorer Ryan Brennan you couldn’t say they didn’t deserve it. Dayle Rooney did brilliantly to beat his man and get a cross away, Brennan met it and headed past Alan Mannus.

The story of the second period was Doherty’s side defending so well to the point where Rovers didn’t look themselves and were restricted to long range efforts and deep balls. An effort from Gaffney and a Sean Hoare header was as dangerous as it got for the Claret and Blue.

Stand in centre-half Evan Weir and Keith Cowan were brilliant and got in front of everything while the rest of the team worked endlessly. Stephen Bradley’s men lacked that incision in the last play.

What didn’t help matters was Mandriou receiving a second yellow with 10 minutes left for complaining about a decision in Drogheda’s favour. A great scalp for the hosts while Bradley will reassess and be glad Derry were defeated tonight.