Dundalk grab away win in Derry 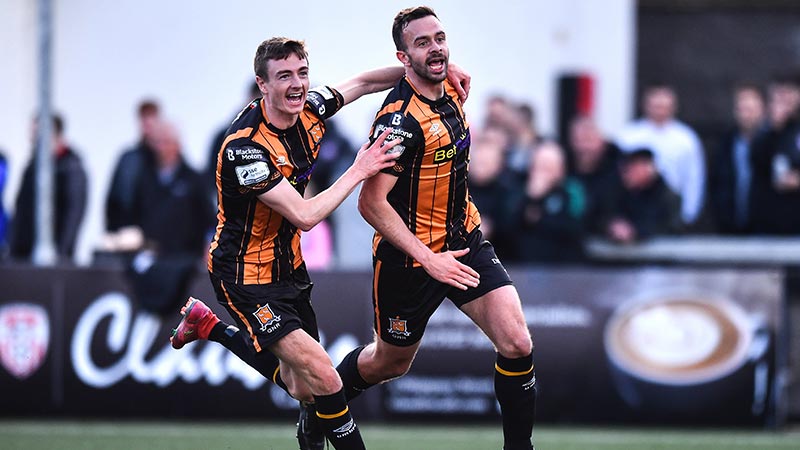 Goals from Robbie Benson and Patrick Hoban earned Dundalk a vital 2-1 victory away to Derry City.

Benson’s early screamer was cancelled out by a flying header from substitute James Akintunde on 74 minutes. But Hoban tucked a precise, left-footed strike beyond Brian Maher with nine minutes to play that ultimately proved to be the winner.

The result extends Dundalk’s unbeaten run to five games whilst Derry are now winless in four.

After a scrappy opening ten minutes, Dundalk opened the scoring in spectacular style. Sam Bone prodded the ball into the path of Benson and the midfielder lashed a sweet strike from the edge of the D beyond the dive of home keeper, Brian Maher.

The Candystripes were creating little in the way of clear cut chances. Will Patching and Jamie McGonigle both put dangerous crosses but no one was there to apply a touch. An audacious bicycle kick by Joe Thomson straight at Nathan Sheppard was the closest they came in the first half.

Derry started the second half strongly with an increased tempo. Yet the Lilywhites were comfortable until an inspired substitution from manager Ruaidhri Higgins.

Striker James Akintunde replaced right back Ronan Boyce and a barraging run from Akintunde drew a foul by Darragh Leahy on the edge of the box. It proved costly as Brandon Kavanagh’s lethal cross was thumped home by Akintunde’s header.

Dundalk seemed rattled and with Brandywell rocking, Derry would have hoped to go and get the win. Yet it was the visitors who snatched it, Hoban drilling an unerringly accurate finish past Maher after substitute James Martin played him through.

In the fracas afterwards visiting manager, Stephen O’Donnell was dismissed from the touchline for protesting a yellow card. In six minutes of added time, Higgins' men pushed hard and came agonisingly close to equalising via a Patching free kick that rattled the crossbar in the 94th minute. Sheppard was routed to the spot.

A bitter pill for Derry to swallow but their lacklustre first half was published by Dundalk’s unbelievably calm finishing.