Shels continue impressive away run with win over Pat’s 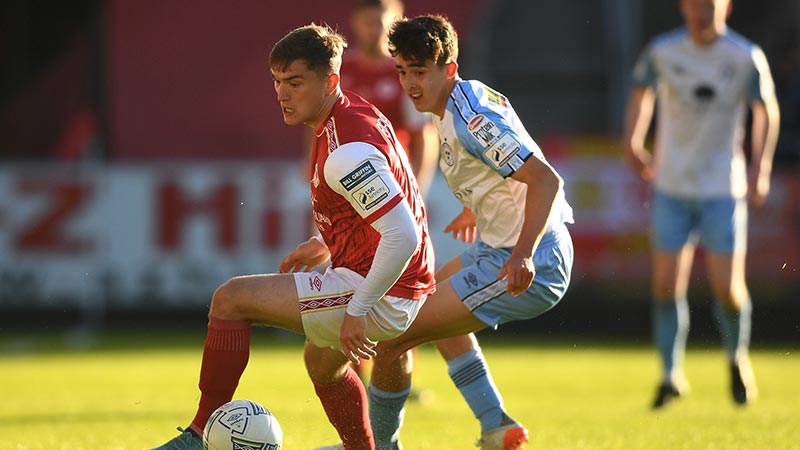 Shelbourne continued their impressive away displays by defeating St. Patrick’s Athletic 2-1 to make it three wins on the bounce.

Goals from Jack Moylan and a deflected JJ Lunney strike ensured the three points for the visitors.

Shels started the first half the better of the two sides. Jack Moylan and Sean Boyd led from the front closing down the Pats back four, not giving them a second to breathe. They created the first opportunity of the game when the ball was switched from Moylan to Farrell but, his cross was a yard or two just ahead of Boyd who couldn’t latch onto it.

The home side should have been ahead on the 20th minute mark when a drag back from Eoin Doyle fell to Forrester in the six-yard area but, he blazed over with the goal at his mercy.

The away side found the breakthrough after 25 minutes. A ball over the top was half cleared by Joe Redmond. The ball fell to the feet of Moylan who dummied a shot, taking Grivosti out of the game, before firing it past Anang to create bedlam in the away end.

Eoin Doyle went closest to equalising for the Saints when he had a shot trickle just past the post. They found their equaliser right on the stroke of half time. A corner was only cleared to the edge of the box to midfielder Adam O’Reilly and after some nice play around the box, the ball was played to Billy King who played it across to the onrushing Redmond to tap home.

Shels started the second half just how they started the first on top. Another Moylan effort was scuffed inside the penalty area and cleared. However, they re-took the lead in the 54th minute when midfielder JJ Lunney collected the ball outside the Saints box, he dummied a shot and had a strike deflected that trickled past Anang and into the corner of the net.

The home side huffed and puffed in patches, but an Eoin Doyle mishit two yards from goal was the closest they went. The away side went closest next when an Aaron O’Driscoll header was cleared off the line from a corner. Shels worked extremely hard for the result by maintaining a good defensive shape and stopping the home side from creating anything in the final third.

For St. Pats it is a result they can’t dwell on as they host Bohs on Monday night in another Dublin derby. Shels are at home to UCD on Monday.