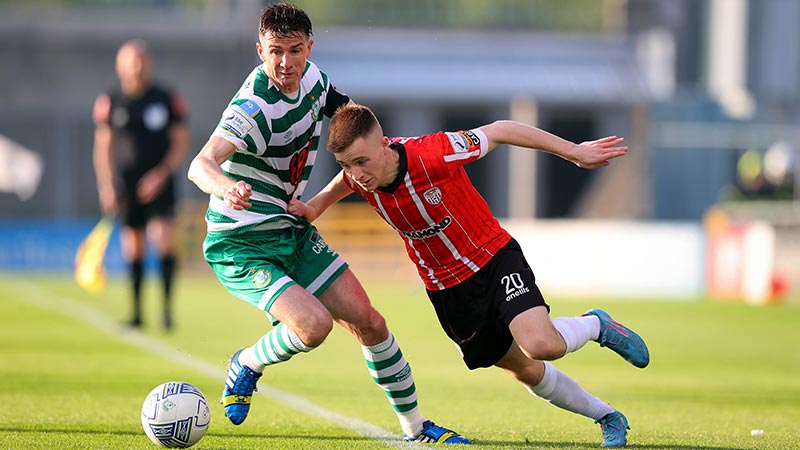 Shamrock Rovers extended their lead at the top of the Airtricity League after defeating Derry City 1-0 at Tallaght Stadium.

The win came courtesy of a late goal from substitute Daniel Mandriou. Although the visitors had been dominant for large spells, Ruaidhrí Higgins men were again left to rue wasteful finishing. The loss leaves them in second, now four points behind Rovers.

Brandon Kavanagh nearly played him in on fifteen minutes shortly before a rapid counterattack saw Matty Smith miskick. A minute later, Smith flashed a cross/shot across the face of Alan Mannus’s goal. From a Kavanagh cross, McGonigle’s header forced Mannus into a stooping save.

Richie Towell and Graham Burke lashed efforts over from range but on half time, Towell and Jack Byrne’s influence began to tell, drawing space which allowed Rory Gaffney to whistle a low shot just wide on the turn.

After half time, possession was more even but the Candystripes had the next big chance. A rapid counterattack again originated it and from Joe Thomson’s pass, Daniel Lafferty couldn’t beat Mannus at his near post. Gaffney jinked into the area at the other end, but Ronan Boyce got back well to clear up for Derry.

Graham Burke, hat-trick hero on Monday for the Hoops, had been kept quiet but after forcing Brian Maher into action, his cutback found Sean Hoare who skied it well over the top. It needed not matter as moments later, Shamrock scored.

Towell powered through midfield, laying it into Andy Lyons on the left. His shot was parried by Maher into the path of lurking substitute Daniel Mandriou who gleefully tapped in. Whilst a fellow substitute Sean Kavanagh made some crucial tackles, Derry’s dejection was evident as Rovers nearly added pushed for a second.

A bitter pill for Higgins and his players to swallow but more performances like this should keep them firmly on Shamrock’s tail at the top of the Airtricity League. Rovers will cherish this rugged win.