Dundalk come from behind to deliver against Bohemians 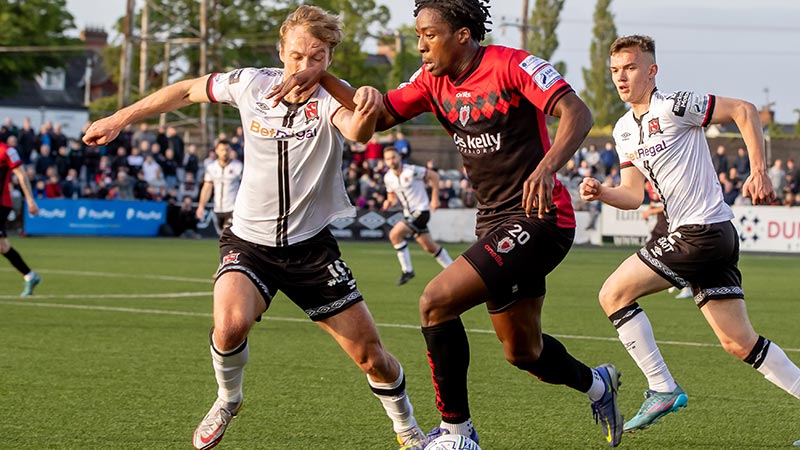 Dundalk came from behind to score three goals and keep pace at the top of the league with victory over Bohemians tonight.

Bohemians took the lead thanks to a Ciaran Kelly strike, but Dundalk pushed into another gear after the break, which the visitors couldn't handle.

Both teams had early chances to score, with Dundalk starting the better of the two, but it was the away side who would score first.

A corner for the Dalymount Park outfit was not cleared by the Dundalk defence and it dropped to Bohs defender Ciaran Kelly at the back post, who opened his body up to steer the ball home to give the away side the lead.

Dundalk kept pressing, and Robbie Benson had the biggest chance of the first half when his 35-yard effort was pushed over the bar by James Talbot; he would earn another opportunity in the second half.

The second half had a completely different feel to it than the first, with Dundalk displaying confidence, control, and, most importantly, goals.

Only four minutes into the second half, Robbie Benson sent the ball to Patrick Hoban, who fired a low attempt past James Tablot with the tiniest of touches to level the game. If the first goal was well-executed in terms of teamwork, the home team's second goal was even better.

Second-half substitute Keith Ward provided the creative spark that Dundalk required, as his clever pass to Daniel Kelly allowed the pacy winger to break free of the Bohemians back line. His deft touch to Benson was inch-perfect, and he would score the Lilywhites all-important second six years to the week after his first-ever Dundalk goal.

Dundalk would seal the contest with another well-worked goal, with Paul Doyle providing the all-important finish late in the tie.

Similar to his goal against UCD last week, the midfielder would pounce onto a loose ball on the fringe of the area and hit a well-taken shot, although with a big deflection, to add a third.

Dundalk secure the win, but they turn up the style a little as they show that timing is crucial - O'Donnell's calls for personnel changes this season in games are proving to be invaluable so far.