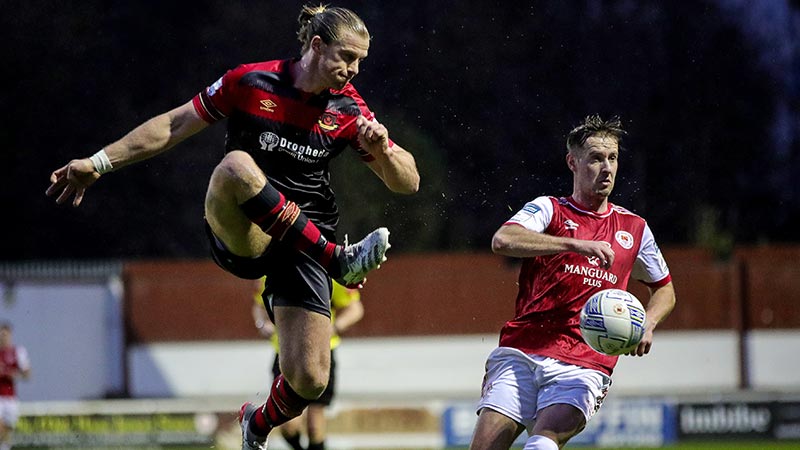 St. Patrick’s Athletic came from behind to draw 1-1 with Drogheda United to take a share of the spoils at Richmond Park in the League of Ireland Premier Division.

The Saints began the affair with the majority of possession with Chris Forrester and Adam O’Reilly seeing plenty of the ball early on.

Despite the hosts early pressure, it was Drogheda United who took the lead after just over a quarter of an hour played.Darragh Nugent cut the ball back into the box and the Pat’s defence failed to clear their lines.

The lively Dayle Rooney took advantage of the defensive mishap and fired home from close range to give Drogs an early lead.

Pat’s did start to create chances after conceding and almost equalised when Anto Breslin went on a brilliant run down the left wing before finding Eoin Doyle inside the danger area.

Sadly for Tim Clancy’s side, Sam Long was equal to Doyle’s attempt.

Mark Doyle and Jack Scott also had half chances for their Pat’s but they couldn't keep their efforts on target. Pat’s struggled in the final third with many players dropping deep and trying to create rather than getting in behind.

Joe Redmond had a good opportunity from a corner but his free header lacked real conviction and Long gathered the ball safely.

With just under 15 minutes remaining, The Saints equalised through Darragh Burns.

Anto Breslin’s low ball found the pacey winger on the edge of the six yard box to level the scores.

Pat’s kept the pressure mounted on Drogheda United but couldn’t find a winner.