Shamrock’s come from behind to draw in Rovers battle 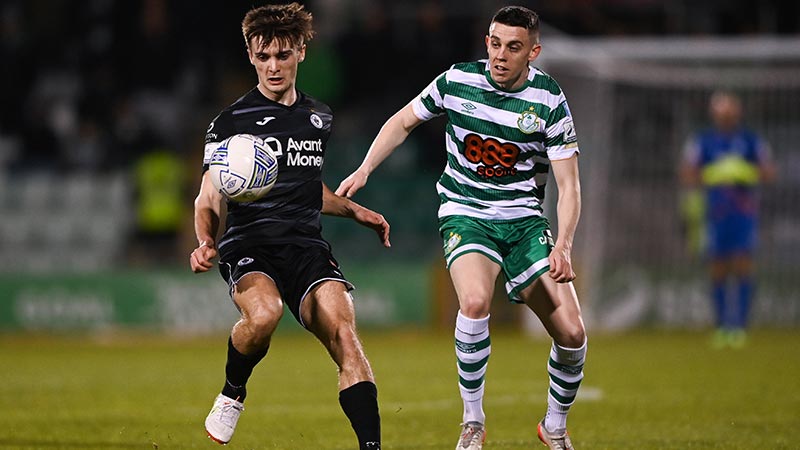 Shamrock Rovers came from two goals down to draw 2-2 with Sligo Rovers in the League of Ireland Premier Division.

The Bit O’Reds led by 2-0 at the break thanks to strikes from Will Fitzgerald and Aidan Keena but the defending league champions replied through a Graham Burke spot kick and an own goal from Sligo.

It was the hosts who started the game the brighter of the two sides and wing backs Andy Lyons and Barry Cotter caused Sligo trouble in the opening stages.

Despite dominating possession early on, Stephen Bradley’s side didn’t have many clear-cut chances.

After just under 20 minutes played, Sligo Rovers made the breakthrough with their first shot of the game through wide man Will Fitzgerald.

Fitzgerald drifted in field before getting on the end of a perfect cross from Karl O’Sullivan, to head his side into the lead.

From here Rovers did step it up a gear with Rory Gaffney and Sean Hoare both going close through headers of their own.

Aidan Keena dealt The Hoops another hammer blow on the half hour after capitalising on an error from Barry Cotter. The in-form Sligo man made no mistake from close range, burying the ball into the bottom corner.

It’s a fifth of the season for Keena and his fourth this week to send The Bit O’Reds into the break with a 2-0 advantage.

Rovers brought Neil Farrugia and Jack Byrne on at half time in an attempt to reduce the deficit, but it was Graham Burke who almost pulled one back for the Tallaght outfit after ten minutes of the second period.

Andy Lyons went on a fantastic run down the right wing before teeing the ball up for Burke. Ed McGinty was forced into the save and he kept his side’s two goal lead.

The Hoops did find a way back into the game just after the hour mark when the lively Andy Lyons was brought down by Adam McDonnell inside the box.

Graham Burke stood up and dispatched the ball into the bottom corner, sending Ed McGinty the wrong way.

The home side came narrowly close to scoring an equaliser after Jack Byrne’s corner found Lee Grace at the back post. Thankfully for Liam Buckley’s men, Jordan Hamilton was well positioned on the line to head clear.

Rovers continued to mount pressure and their efforts were rewarded when Sean Hoare’s header was hit into the back of the net by Sligo's Max Mata to bring the sides level.

Ed McGinty made a fantastic double save just moments later to deny Andy Lyons and Richie Towell from close range.