Todd earns UCD share of spoils against Bohs in Bowl 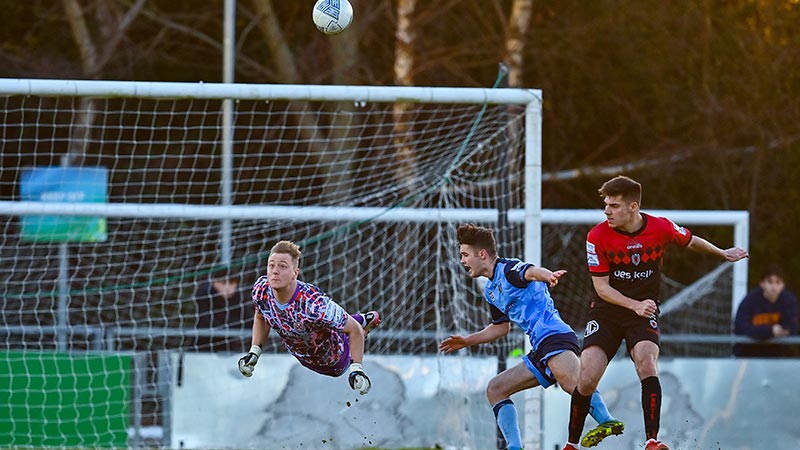 A 67th minute Sam Todd equaliser ensured a share of the spoils for UCD against Bohemians at the UCD Bowl this evening.

Promise Omochere opened the scoring after five minutes for the travelling side as Bohemians dominated the early exchanges.

The resilient students hung on in the match and were rewarded for that in 22 minutes into the second half as Todd found the back of the net after he was left unmarked from a corner.

Both sides had opportunities to win the match but they share the points in Belfield.

It was a fast start for Bohemians as Omochere reacted quickly to a split ball in the box from an inviting ball in, UCD keeper Lorcan Healy appealed for a foul but his complaints were ignored and the away side had the lead five minutes in.

It was all Bohemians in the early stages as UCD struggled to get a foot on the ball in the opening 15 minutes. Dawson Devoy nearly put the visitors 2-0 after his shot from the edge of the box rattled the post on 16 minutes.

Bohs passing and quick movement seemed too much for The students to handle in the early stages and whenever the ball broke to the home side there was intense pressure being put on them causing numerous turnovers.

Colm Whelan had three efforts on goal as he broke through one on one all being blocked or saved and his final shot flying over the bar.

The 42nd minute saw UCD's Liam Kerrigan shoot just wide the home ending the half better than they started.

The sides came out in the second half at a great pace, both sides pushing for a goal. It was a back and forth affair.

James Talbot made some good saves, a great double save in the 54th minute keeping his side 1-0 up.

UCD found the breakthrough in the 67th minute Sam Todd left completely unmarked from a corner and headed the ball neatly into the back of the net the sides now level.

With it all to play for, both sides had efforts to win it Omochere heading over the bar from a set piece in the 87th minute while a solo effort from UCD's Colm Whelan in the 88th minute was saved by an impressive James Talbot.

In the end the away side may be disappointed with the draw and a jubilant UCD will be happy with their efforts in the second half.