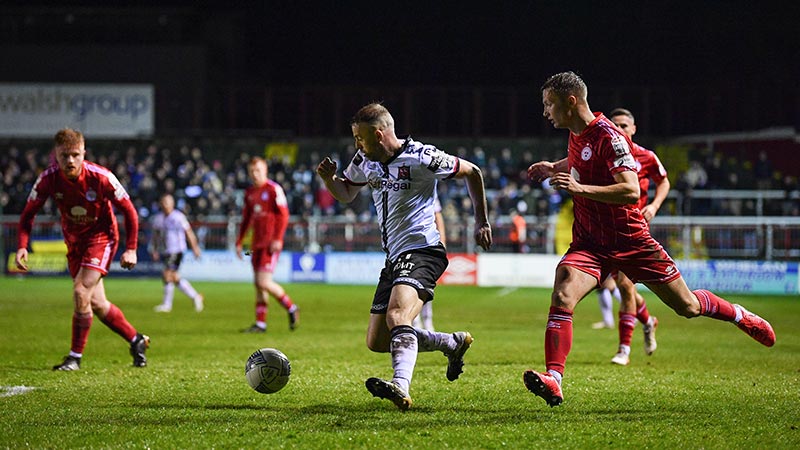 Dundalk and Shelbourne claimed a share of the spoils in a game that while it took time to come alive when it marked a piece of history.

Damien Duff's side is still without a home win in what was a packed Tolka Park, it was the away sides number nine who etched his name into history as Patrick Hoban's second-half strike was goal number 100 in his Dundalk career.

Sean Boyd spoiled the celebrations as he despatched a penalty after falling under a heavy challenge with just minutes to spare to earn the Reds a point.

For much of the first half, the game was played in midfield as neither side could come to grips with the battle for possession.

The best of the chances for either side came in the latter ends of the second half as the game began to open up with Sam Bone's strike on the edge of the area was well saved by Lewis Webb. For Shelbourne JR Wilson had the goal at his mercy as he latched onto a Kameron Ledwidge cross but his effort was always rising.

The second half was a much more enthralling affair with both sides pushing forward to take a stake in the game. JR Willson's attempt to put his side in the lead took a wicked deflection as it bounced off Daniel Kelly, Mark Connolly however was alert to the danger and cleared the ball as Sheppard was rooted to his line.

Keith Ward almost put the Lilywhites ahead with a spectacular overhead kick, Webb was equal to the effort that a few inches higher could have cased the Shels number one a spot of bother.

Dundalk was to take the lead moments later after Robbie Benson was fouled, Keith Wards resulting free-kick was headed past Webb to notch goal number 100 for Dundalk. It looked as if the game was set and match for the North Louth men only for a final moment flashpoint to change the fortunes for the Tolka Park outfit.

Nathan Sheppard closed down on Sean Boyd and tangled with the Reds forward, the protests were just and Shelbourne were awarded a penalty. Boyd dusted himself off to grab a precious point. A home win still evades Damien Duffy, Dundalk go back to Oriel still unbeaten this season.