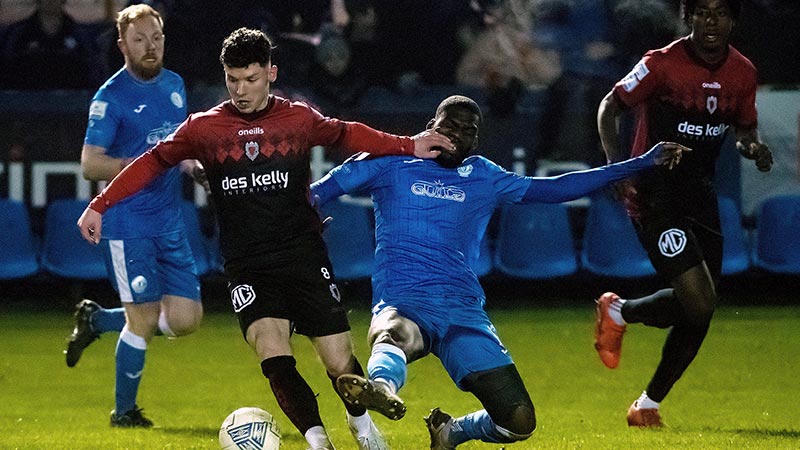 Spoils were shared in Ballybofey tonight as an entertaining clash between Finn Harps and Bohemians ended 1-1.

Promise Omichere gave Bohs the lead in the second half after pouncing on a defensive error, but a superb Ryan Connolly strike cancelled that out after a lovely one-two with Bastien Hery ten minutes later.

This game started off lively when just five minutes in Max Murphy tested Mark McGinley from range following a short corner. McGinley got down well to deny Bohs the lead, but the tempo was set.

Both teams had half chances in the opening 20, but in the 10 minutes between the 20th minute mark and half hour mark, yellow cards were flying out of the refs’ pocket.

In the 25th minute, a scuffle ensued after a confrontation between Promise Omochere and Ethan Boyle resulted in Omochere pushing Boyle to the ground, which caused both sets of players to get involved. Omochere and Boyle received a booking each, with the former arguably lucky to stay on. Yoyo Mahdy also got a booking for his part.

James Finnerty, Filip Miljahevic and Ryan Connolly all also picked up yellows either side of this incident for fouls.

A goal came a few minutes into the second half when Promise Omochere capitalised on a defensive error. A Dawson Devoy cross was not dealt with by Ryan Rainey, who fluffed his lines. Omochere took the loose ball first time, making no mistake.

Over the coming 10-15 minutes Harps started to apply pressure and it paid off. In the 66th minute, Ryan Connolly dished the ball out left to Bastien Hery. Hery played it back to Connolly, who took it into the box and slammed into the roof of the net. Given how it was going, it was what Harps deserved.

Omochere nearly sunk Harps hearts five minutes later when a ferocious effort from just outside the box clattered the bar. It looked as if we were set for a hectic last twenty.

This was not to be the case. Both sides had half chances, but nothing solid. Rainey displayed some quality defending to make up for his earlier mistake.

A talking point came in the 89th minute when Omochere was sent off for a second yellow for a foul on Boyle. Upon second look, it may not have even been a foul. Keith Long will have to make do without his line leader for their next game.