First win of campaign for Drogheda 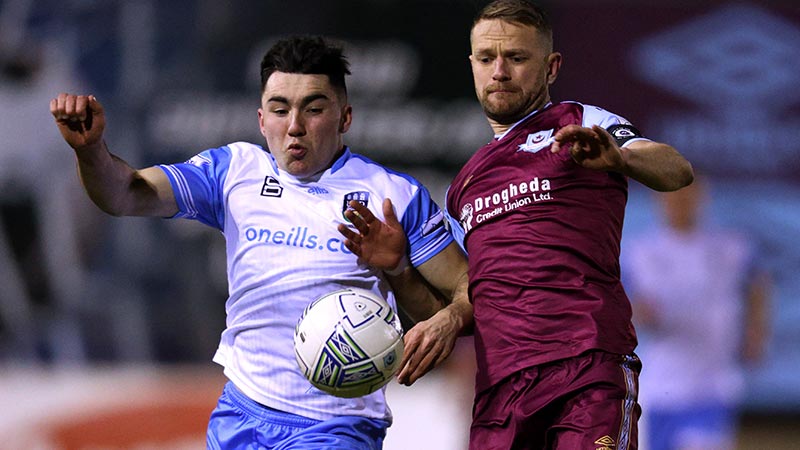 Drogheda United grabbed their first win of the season tonight in an entertaining 4-2 victory over UCD at Head in the Game Park.

The first half treated the sold out crowd to three goals from the hosts, the first a screamer from Gary Deegan, followed by a delightful Chris Lyons double.

Sam Todd got one back for the Students, before Dean Williams gave the Drogs a fourth on the hour. Liam Kerrigan then made it 4-2 late on but Drogheda saw out the win.

The tickets for the game were free but the quality on the pitch was worth much more and this one was a great watch. The hosts were relatively comfortable and will be relieved to get off the mark.

Drogheda could have been disheartened when Dean Williams scuffed a golden chance from close range early on.

However they continued on in good vain and Deegan’s rocket from the edge of the area 20 minutes in gave them a deserved lead.

George Poynton was a menace with direct runs down the right and Williams and Lyons were complimentary as ever up top. A much more fluid performance in attack was key to the home dominance.

Lyons added the second on 23 minutes with a brilliantly curling effort from the edge using his low centre of gravity to fend of defenders in the process.  He poached his double at the back post from a Poynton cross just before the break.

UCD were brighter in the first half stemming from Sam Todd’s converted header from a corner on 55 minutes. Dean Williams rectified this however drilling a shot into the corner from a Darragh Markey setup on the hour.

From here it felt like the Louth side were too strong. Liam Kerrigan scored a looping effort from distance with 10 to go when Colin McCabe bizarrely came out of his goal from a set piece leaving behind an empty net.

Kevin Doherty’s men will be frustrated with no clean sheet but only to an extent, their main emotion being relief. Andy Meyler will have to motivate the Students to go again.