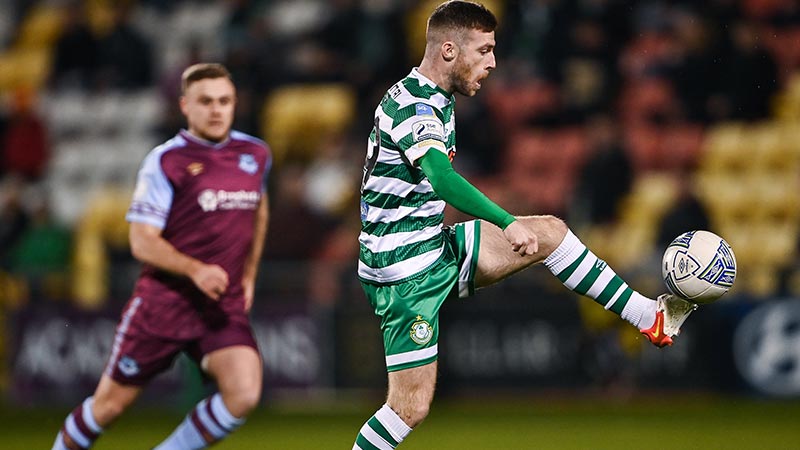 Byrne assisted Sean Gannon for the first goal of the game, before hitting a rocket from 25 yards to double his side’s lead.

Evan Weir pulled one back for the visitors midway through the second half but a Graham Burke strike with just under ten minutes to play, sealed the win for Rovers.

Drogheda United started the affair slightly on top and Alan Mannus was called into action after just five minutes on the clock. Adam Foley’s low driven effort was palmed around the posts by the veteran keeper.

Sadly, for Drogs, this was as good as it got during the first period. Roberto Lopes twice came close from Jack Byrne’s out swinging corners, but his headers went narrowly over the target.

Rovers did open the scoring after just over 20 minutes played. Jack Byrne played an inch perfect through ball into the path of wing back Sean Gannon. Gannon made no mistake and rifled the ball into the bottom corner past Colin McCabe.

The Tallaght Stadium outfit almost doubled their advantage minutes later. Byrne was involved yet again, this time playing Dano Mandroiu through down the left wing. Mandroiu played the ball inside into the path of Andy Lyons who’s left footed strike was saved by McCabe.

It was a piece of individual magic from Jack Byrne that doubled the hosts’ lead. Byrne picked the ball up in space from around 25 yards out and hit a rocket into the top corner, leaving Colin McCabe with no chance.

Things nearly went from bad to worse for the Louth side when Mandroiu tried his luck from a similar distance, but McCabe got down well to deny the Rovers’ attacker.

Stephen Bradley’s side started the second half in the same way they finished the first and Sean Gannon almost found his second of the game just minutes after the restart. Jack Byrne’s free kick found Gannon in space inside the 18-yard box. The wing back’s glancing header was saved well by McCabe.

Drogheda pulled a goal back just after the hour mark after Sean Roughan’s powerful cross was spilled by Alan Mannus, straight into the path of Evan Weir. Weir blasted home from close range to score his first goal for Drogheda United.

Some quick thinking from Andy Lyons set Graham Burke through down the left wing with just over ten minutes to go. Burke’s left footed strike was saved well by the feet of McCabe.

Burke did extend Shamrock Rovers’ lead with just under ten minutes remaining. The lively attacker pounced on a long ball over the Drogheda defence before calmly slotting the ball past Colin McCabe.