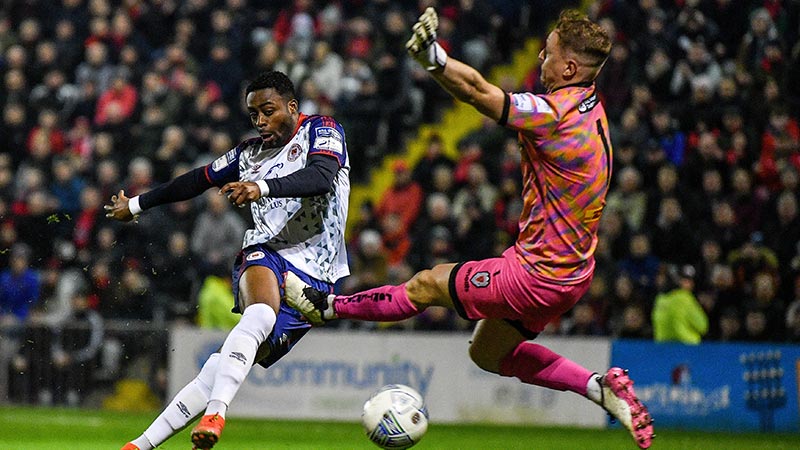 Stephen Mallon’s 50th minute strike proved to be the difference between Bohemians and St. Pats at Dalymount tonight as The Gypsies won this Dublin derby 1-0.

Mallon, who had missed a gift of a chance in the first-half, made sure of things after Jack Scott misjudged James Talbot’s goal kick which left the Belfast winger with nothing but Pats goalkeeper Joseph Anang in front of him.

Anang was kept the busiest of the two goalkeepers at Dalymount this evening.

The Ghanain denied Tyreke Wilson from curling in a free-kick and managed to save an effort from Mallon inside the six-yard box.

A deflected Keith Twardek cross resulted in another reaction save from Anang.

Ali Coote and Dawson Devoy marshalled the midfield for the hosts in the opening 45 minutes with some great moments of play making.

The visitors did not offer much creativity, Tunde Owolabi with their best chance of the first half as he forced James Talbot into making a good save down low.

Eoin and Mark Doyle caused problems for The Gypsies back four but they did not manage to create anything substantial.

Bohs finished the half the stronger side but failed to convert any chances and the teams went in scoreless at the break.

Keith Long’s side looked happy to just sit back and soak up the pressure forcing Pats to shoot from distance. Darragh Burns had two in the final 15 minutes but neither effort was anywhere near the target.

Tim Clancy’s side are faced with yet another Dublin derby as they welcome Shamrock Rovers to Richmond Park on Friday night.