Stalemate at the Brandywell 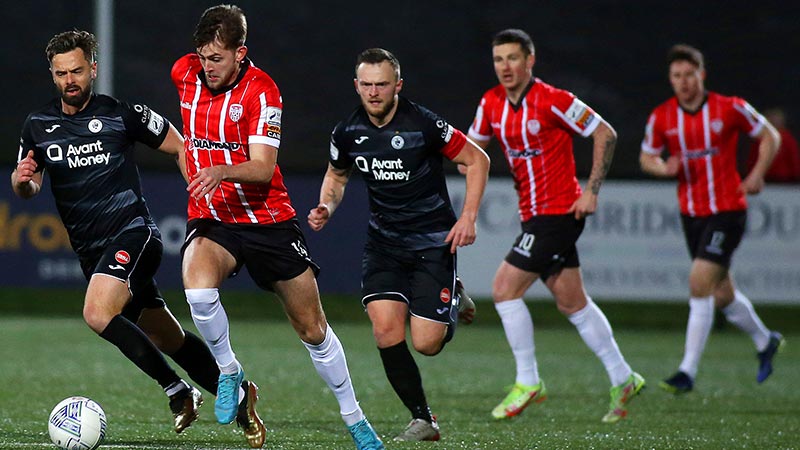 Northwest rivals Derry City and Sligo Rovers split the points tonight at the Brandywell, a 0-0 score-line justified given both teams struggle in the attacking department.

The hosts will have been disappointed not to have capitalised on a victory against Shamrock Rovers on Friday, while Sligo may be content with the result on the road given two impactful injured inflicted substitutions.

Always going to be tagged as a tough affair for the visitors given they only garnered a point from their four matchups with Derry last season, the game proved fairly uneventful with most of the play taking place in the middle of the park.

Derry dominated the first half, forcing Ed McGinty into plenty of touches on the ball.

There Jamie McGonigle was denied only by the crossbar, as was Sligo captain David Cawley down the opposite side of the pitch just moments before halftime although the score line still read 0-0 heading into the break.

The less than expansive football rolled over then into the second half then, with neither side able to break through.

City tried to shake things up by introducing Matty Smith and Ronan Boyce shortly after the restart, as did Rovers who were forced into replacing Robbie McCourt with Paddy Kirk after the left back picked up an injury.

New kid on the block Aidan Keena had one of The Bit O’Red’s rare chances in the 47th minute but the Mullingar native failed to convert.

Greg Bolger picked up a yellow card before he collected a knock and was replaced by Niall Morahan, while Ciaran Coll made way for Daniel Lafferty.

Adam McDonnell and Will Fitzgerald also were shown yellow cards, exemplifying the tension in the fixture.

Later in the half Brandon Kavanagh and Eoin Toal came close for the Candystripes and Liam Buckley opted to wind down the clock and put on Max Mata and Seamus Keogh late on.

In the next round both units will aspire to right some wrongs as Sligo are take on Dundalk, with the Ulster outfit set to clash with Shelbourne.