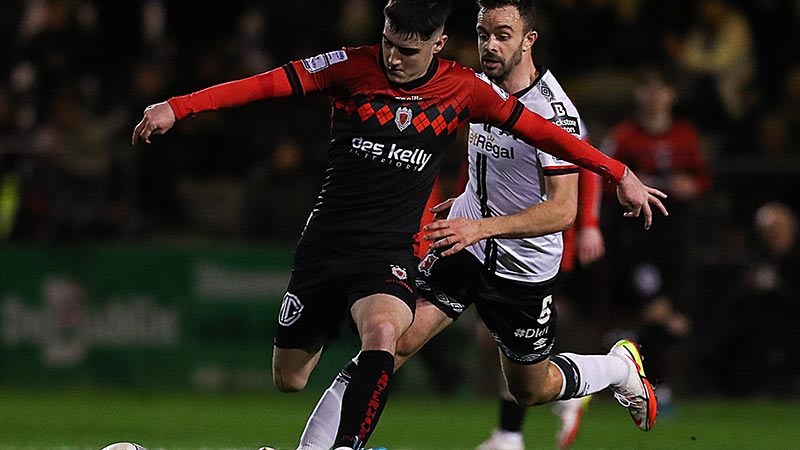 Bohemians were pulled back twice by Dundalk in a thrilling contest at Dalymount Park.

In a game that was high tempo from the offset, Jordan Flores marked his debut with a goal against his former club with Dundalk pulling level thanks to Pat Hoban.

Promise Omochere scored the goal of the evening with an audacious chip just before halftime but a resurgent Dundalk drew level with a second goal in two games for loanee winger Stephen Bradley.

Bohemians have the first chance of note as Jordan Flores' long-range effort whistled past Nathan Sheppards far post. For the visitors, Daniel Kelly would have the first of two goal-scoring opportunities following a clever break Kelly’s shot took a deflection for a corner. Bohemians kept asserting pressure and it paid dividends as Flores would mark his full debut for his new club with a goal, a pinpoint corner that was sent into the Dundalk goal area with Flores was on hand to score against his former club with a well-placed header, the celebrations and the lead would be short-lived.

Some 90 seconds later, Dundalk would be back on level terms courtesy of Patrick Hoban. The Dundalk striker clinched his 160th career goal as he pounced from close range to powerfully head the ball past the onrushing James Talbot from a Dundalk corner.

Bohemians would keep pressing forward however it would be the Lilywhites who nearly went ahead as the half wore on. Kelly broke free of the Bohemians' defensive line and saw his low effort well saved but in reality, he should have scored with only Talbot to beat.

Bohemians were to go ahead as referee Paul McLaughlin played the advantage and Kris Twardek sent in an excellent cross after Lewis Macari lost his footing in the build-up. Promise Omochere seeing the ball was behind him used his heel to flick the ball over Sheppard for it to nestle into the back of the net.

The second half in large was in the visitor's favour as they chased the tie and took the contest to the host. Robbie Benson had an opportunity early doors but Talbot was equal to the opportunity. Dundalk didn't have long to wait for their equaliser as Daniel Kelly's cross to the back post was met by Stephen Bradley with the Hibernian loanee heading deftly past Tablot to equalise.

Promise Omochere had a chance to put the home side back in the lead only for him to lose his footing at the opportune moment. Bradley nearly snatched a winner for the Lilywhites only to be denied by Talbot at the near post.

Both sides had late chances to clinch the three points but neither Mark Connolly nor Jamie Mullins could put their name in lights as the hero of the hour.