Stalemate for Harps and Drogheda 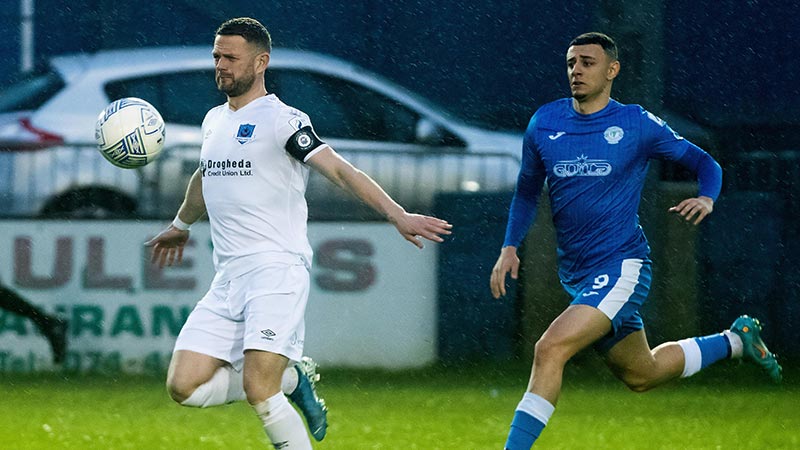 Neither Finn Harps or Drogheda can escape the tail-end of the SSE Airtricity Premier Division as the two sides fought out a stalemate in tough conditions in Ballybofey this evening.

Drogheda took an early lead through James Clarke but goals from Eric McWoods and Yousef Mahdy saw Harps go into the break 2-1 up. The home side managed to keep their composure until the late stages of the second when sub Ryan Brennan struck an equaliser for Drogheda to draw the game.

Early on, as they would all half, Harps opted for a long ball strategy in the hope of beating the visitor's high press but playing against the wind, they struggled to have any luck up front.

Drogheda looked a lot slicker going forward and played short passes at pace to trouble the opposition defence. The visitor's game plan paid off in the 4th minute when Gary Deegan came flying in from the right flank. He played a short cross inside to James Clarke who slid to get a foot on the ball and sent it into the Harps net to open scoring.

The visitors' momentum continued as Dale Rooney and Evan Weir linked up well for Drogheda on the left wing and used their pace to terrorise the Harp's defenders.

The Ballybofey side didn't give up though and worked their way back into the game, persisting with the long ball strategy which proved more successful as the half went on.

Debutant goalkeeper Mulreaney sent a long ball up the field and it bounced around for Harps to win it and send a cutting pass to Filip Mihaljevic. One on one with the keeper, the Croatian forward was blocked down but the ball fell for Eric McWoods who curled it into the visitors' goal to equalise.

Harps grew into the game from then on with Barry McNamee pulling the strings for his side going forward. Late in the half McNamee sent a long ball to McWoods who found Mihaljevic at the far post in the United box. He headed it down for striker Yousef Mahdy to tap into goal before half-time.

Harps began the second half the more dangerous but couldn't find goal. The tide turned in Drogheda's favour on the hour mark as big-hitters Chris Lyons and Ryan Brennan were subbed on and they began to dominate play.

Regardless, big chances proved rare for United and it was Harps who looked likely to score on the counter but were denied by big efforts from the Drogs defence and keeper Sam Long.

United kept coming though and on 84 minutes Ryan Brennan struck low into the left corner to bring his side level.

Late drama followed as Harps hit back and had several big chances to get a late late winner through Mark Timlin, Ryan Connolly, and Bastien Hery only to be denied once again by last ditch efforts from Sam Long and his defenders.

Without a win, both sides remain at the wrong end of the league table after eight games.