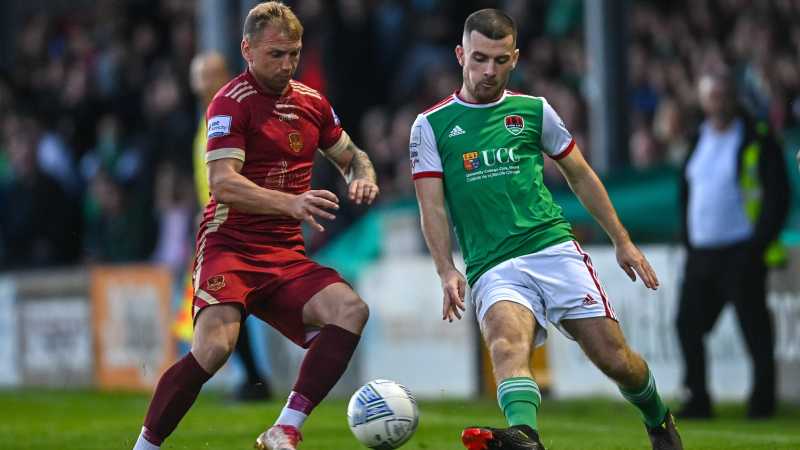 Galway delayed the Cork celebrations after coming from a goal behind to win 2-1 in Eamonn Deacy park.

Cork took the lead in the 50th minute through an effort from Barry Coffey finding the back of the net.

It was two goals in 5 minutes for United Wilson Waweru in the 70th minute from close range and a wonderful overhead kick effort from Charlie Lyons saw Galway pick up the three points and spoil the party for Cork for at least another matchweek.

In a match where a win meant so much to both sides we had a very open but tense start to the contest.

Galway took a while to get into the match, Cork starting the better passing and moving the ball around quickly and effectively.

After 15 minutes Galway started to get a grip of the game, getting joy down their left-hand side with Manning getting on the ball and driving forwards at every opportunity.

United were keeping Cork pinned back in their own half but were failing to turn their good spell into any major chances corners and throw-ins causing mayhem as usual for United set pieces they often use very effectively but it was Cork who got closest in the 28th minute Ally Gilchrist rattling the crossbar from a brilliant ball in from a corner.

United finished out the first half on top and with both sides going in 0-0 at the break it would all be decided in the second half.

Cork came out for the second half on the front foot and were rewarded with 50 minutes on the clock Barry Coffey had an attempt from the edge of the box, got a deflection, and sailed over the Galway keeper Cork 1-0 up and a step closer to the title!

Play was suspended shortly after some extravagant goal celebrations from the travelling support which encroached on the pitch and Galway kicked things off again 5 minutes later with it all to do.

Cork seemed to be sailing comfortably with Galway lacking an attacking drive.

John Caulfield made changes on the 64th minute and United stepped up a gear.

Wilson Waweru just onto the field found the back of the net from close range after Stephen Walsh set him up on the box 1-1 70 minutes on the clock.

Within just three minutes jubilation for Galway as Charlie Lyons overhead kick from a corner found the bottom corner out of nowhere Galway were leading Cork in shock.