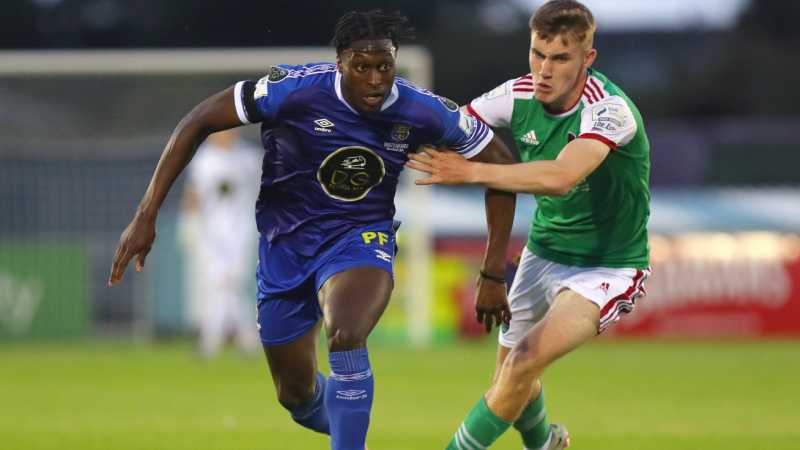 A cagey first half left a lot to be desired of this clash but the game sparked into life in the second after Cian Murphy put Cork ahead on 55 minutes as Waterford failed to defend a City set-piece.

Minutes later Waterford would take another blow as Tunmise Sobowale was shown a straight red card after he collided with Cork's Aaron Bolger.

The Blues pushed relentlessly after that and struck an equaliser as debutant sub Raul Uche met a Phoenix Patterson corner in the 89th minute.

A late penalty was rewarded to City at the end of four minutes of additional time after Ally Gilchrist was deemed to be fouled in the Waterford area and Keating fired in the winner.

A substantial crowd presented themselves for Waterford's first home game under new owner Andy Pilley though the first-half of this derby may have bored supporters of both sides.

League leaders Cork preferred to sit back though Ruairi Keating would hit two decent chances over the crossbar for the visitors.

Waterford saw much of the ball but struggled to bypass the Cork defensive structure, with striker Wassim Aouachria well-marshalled by City center-back Ally Gilchrist.

Blues dangerman Phoenix Patterson was limited to sending in crosses from his left-wing while runs from Junior Quitirna and Roland Idowu were halted by the City defence.

Aouachria came closest to putting Waterford ahead on 39 minutes after he attempted to run on to a long ball from Idowu but Cork's keeper David Harrington rushed out to boot it away.

If the opening half was somewhat dull, there was enough excitement for two halves in the second period of play.

Cork pressure after the restart told in the 55th minute after Waterford failed to deal with a City set-piece.

Paul Martin made an excellent save to deny a Cork attacker's initial attempt on goal but Cian Murphy was there to follow up and powered home from point-blank range to send the Rebels ahead.

The Blues took another blow moments later when Sobowale was sent off by referee Alan Patchell.

Nevertheless, the home side had most of the play from then on and pushed for an equaliser, with an  Aouachria header hitting the crossbar on 64 minutes.

Waterford appeared to have sealed a draw when the Spaniard Uche struck a goal on 89 minutes but there was more to come.

The final minute of extra time saw Gilchrist hit the ground inside the Waterford box and a penalty was awarded, with Aouachria seen to have shoved the defender, and Keating put it away to extend Cork's lead at the top of the division.