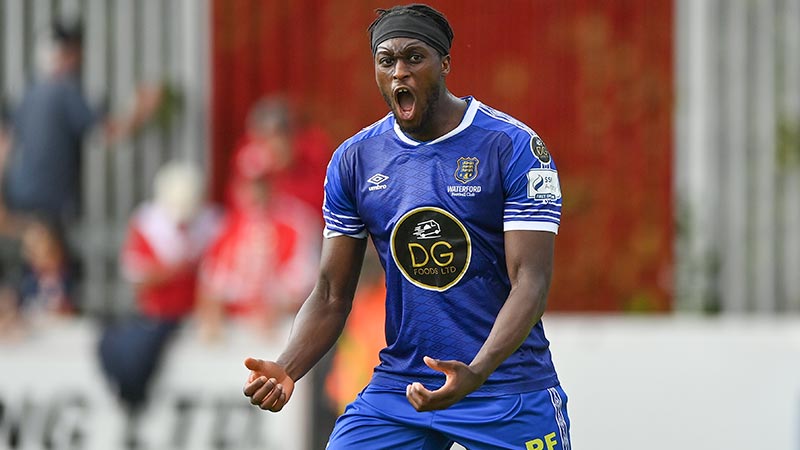 Waterford maintained their promotion push with a 2-1 win over Treaty United at Markets Field.

Quickfire goals from Tunmise Sobowale and Darragh Power gave the Danny Searle’s an early lead they’d have craved. Treaty were unable to breach a resolute Waterford rear-guard until right at the death, with sub Success Edogun found the net for his second goal for his new club.

In sunny Markets Field, after an even start, Waterford grabbed the game by the scruff of the neck when they took the lead on 18 minutes.

Treaty had been victories in this tie earlier in the season but were found to be off the pace against their Munster rivals. Waterford thumped United 4-0 in their most recent clash, on Suirside.

Sobowale’s 25-yard piledriver was too good for Jack Brady. Power scrambled home from close range after the ball had twice ricocheted off the woodwork – this all in what had been an even opening 26 minutes.

The hosts did have further openings but Martin was underemployed in the visiting goal. He was alert to deny Lee Devitt beyond the hour mark. The midfielder cut through the middle but was unable to send his shot to either corner, allowing the keeper gather after blocking with his feet.

Treaty have now lost seven times, all to the top three – three to Cork City and twice against both Galway United and tonight’s opposition.

Waterford, now stuck in 3rd, may have an outside chance of catching Galway for second, but it is more likely they’ll stay in third for the play-off spots. They played attractive football and were clearly energised by the win over FAI Cup holders St. Patrick’s Athletic last weekend.

Waterford face into ties with the top two, Cork City and Galway United. Treaty travel to Leeside next Friday.