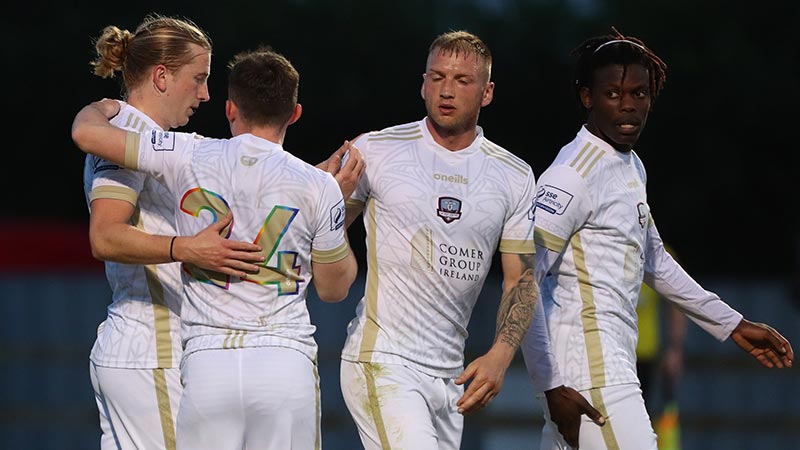 Chaos in Athlone as Galway strike twice late through Lomboto and Dimas to steal the points at Athlone after the Town thought they had stolen a last-minute point.

Manley opened the scoring for the Tribesmen just before the 20th minute in what must be said was a very open entertaining match.

Galway came into the fixture as heavy favourites off the back of a hard-fought point in the top of the table clash at Turners Cross last week. Athlone would be confident however off the back of their first win in five.

Athlone had the first chance of the game. Oluwa played in McAuley but his shot was no trouble to Kearns in the Galway net.

Galway opened the scoring just before the twenty-minute mark. Irhue's back pass was caught out as Manley pounced for Galway to brilliantly finish off his right into the far corner past Velikin.

Athlone looked to get back into it with Lennon having an effort from range saved but the end-to-end action would continue immediately with Galway working a big chance of their own through Hurley who’s nifty footwork worked space but Veliken was equal to his effort.

Both sides pressed towards the end of what must be said was an entertaining first half but it remained Galway with the slender 1-0 lead at the break.

The second half was a lot more cagey with Athlone being the better of the sides but creating no real major chances to show for their dominance on the ball. McBride had an effort that fell to his feet from a corner saved but with 20 to go Athlone still trailed.

Athlone had a penalty shout waved away with ten to go after a potential handball was waved away by the referee to the major appeals of the town faithful with 10 to go.

Andy Spain stepped up and smashed the ball from 25 yards to potentially rescue a point but more drama was to come….

Galway stole the game late on through Lomboto whose left-footed effort went low into the keepers' right corner amongst major protests from Athlone fans who believed there should have been a handball.

The game fell apart immediately as Dimas added a third from close range for Galway and Athlone had Connolly sent off in the aftermath for remonstrating.