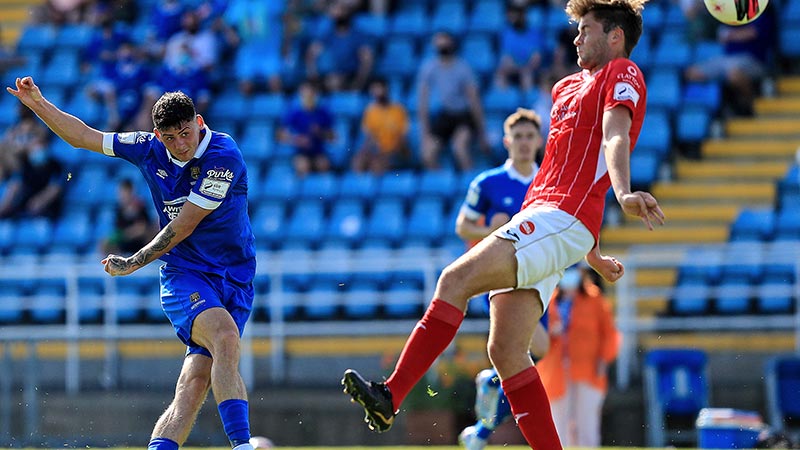 The visitors started the stronger especially through Liam Griffin who was unlucky not to score from a free kick in the opening minutes.

Cian Kavanagh also went close after jinking past the Cobh defence before somehow putting the ball wide from ten yards out.

The Blues striker would get his goal in the 17th minute however when Junior Quitrna put him through on goal before slotting the ball past Darragh Burke in the Rams goal.
Wassem Aoauchria doubled their lead ten minutes later when he pounced on a Burke deflection from a corner to tap home for an easy finish.

The rest of the half descended into a scrappy affair with seven yellow cards given out for various scuffles on the stroke of half-time.
Waterford picked up where they left off in the second half and so did Aoauchria, who got his second of the game after 50 minutes. The striker cut in off his left before firing the ball into the top corner giving Burke no chance and effectively ending the game as a contest.

Danny Searle began to ring the substitutes on the hour mark it was super sub Callum Stringer who got Waterford’s fourth goal after his volley hit the bar before falling into the net.

Junior Quitrna made it 5-0 moments later after finding himself in yards of space before curling a right footed shot into the corner of the net.

The game petered out in the last twenty minutes with many Cobh fans heading for the exit early in what has been a disappointing season at home.

Overall, an impressive return to form for Waterford who solidify third place while its three games without a result for new Cobh boss Shane Keegan.