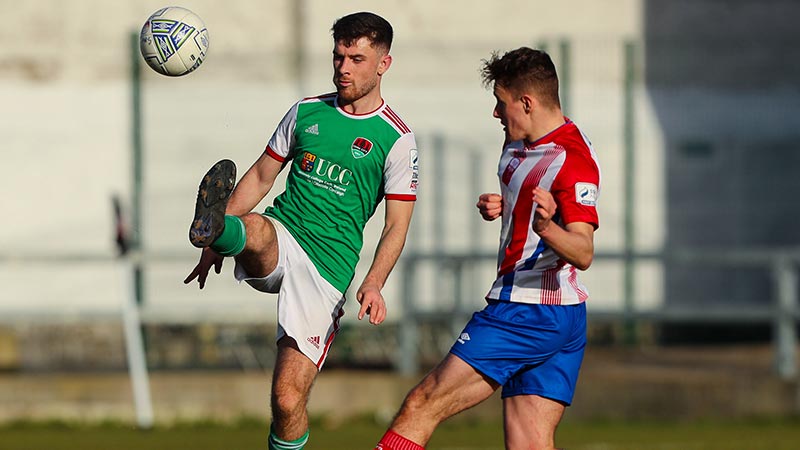 The league leaders were far too strong for an out-of-sorts United, who failed to add to their point in Galway on Friday night.

It is a third league triumph over Treaty, all without conceding a goal. David Harrington had little to do in the City goal in a easier than expected win.

The league leaders were far too strong for an out-of-sorts United, who failed to add to their point in Galway on Friday night.

Treaty United shuffled their side with three changes from their Friday’s stalemate in Galway. Giving Colin Conroy a maiden start, while Conor Melody and Joel Coustrain also got the nod from Tommy Barrett.

Cork made two changes, with Mark O’Mahony and Kieran Coates were replaced in the XI by Ruairi Keating and James Doona.

Kevin O’Connor opened the scoring when he hit a quality volley, at the back-post following a shot from a deflected shot. Treaty were asleep at the corner and Winn was flat footed as veteran O’Connor scored with his less-favoured foot.

Srbely headed them two in front on 29 minutes with Conor Winn missing a cross from Cian Bargary. Ruairi Keating added another near the half, with Srbely turning provider with another right wing cross.

Aaron Bolger curled a beauty late in the half, from just outside the area. Cork were awesome, but weren’t near their best.

In an even second half, the hosts enjoyed things a bit better with some openings through Conor Melody and Jack Lynch. Despite that, Conor Winn gifted Healy’s side a fifth goal inside the last ten minutes. His clearance found Keating who fed the onrushing Darragh Crowley and the substitute finished with ease in front of a large travelling support.

Cork boost their goal difference on a night they open up a four point gap on Galway United, who were beaten by Longford Town.

Treaty must re-group, as they’ve hung onto their play-off spot, albeit on goal difference after Wexford drew in Bray.