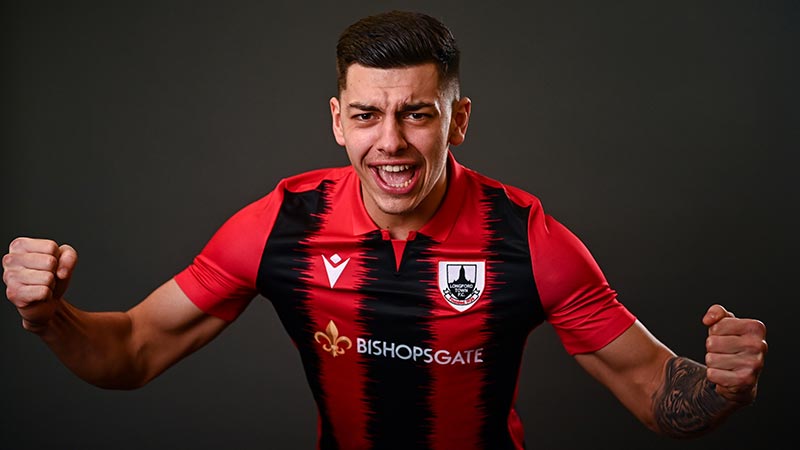 Magerusan opened the scoring in the 62nd minute; Mick McDonnell knocked the ball down and Magerusan fired to the net from close range.

In the 74th minute Town had claims for a penalty waved away. Eight minutes later a Dylan Barnett corner was headed home by Magerusan.
The home side bossed the early exchanges of the first half with Conor Kearns denying Aaron Robinson and Magerusan.

Magerusa also hit the crossbar with a header in the fourth minute. Galway’s Conor McCormack brought an excellent save out of Town netminder Luke Dennison in the 14th minute.

Minutes later Wilson Waweru got into a good position but he dragged his shot wide. In the 23rd minute Kearns brought off an excellent save to deny Aaron Robinson. The home side continued to cause problems for the Galway defence.

In the 26th minute Michael Barker got onto the end of a Dylan Barnett corner but his effort hit Alex Murphy and he cleared. Three minutes later and Mageruson really should’ve done better with his effort.

Murphy played an excellent ball into Ed McCarthy in the 33rd minute but he brought a good save out of Dennison. Just before the break the visitors piled on pressure. Diego Portilla had an effort that was blocked by the Town defence. There was a scramble but nothing was created to trouble the Town keeper.

The opening exchanges of the second half were quite even. The deadlock was eventually broken just after the hour mark by Magerusan, it was no more than the player and the home side deserved. In the 74th minute the home side had appeals for a penalty turned down after Portilla appeared to haul down Karl Chambers.

Galway emptied their bench in the hope of getting something out of the game but it didn’t have the desired impact. In the 82nd minute Magerusan doubled the home side’s advantage. Galway couldn’t find a response and offered very little in the way of chances as Dennison kept his goal intact.