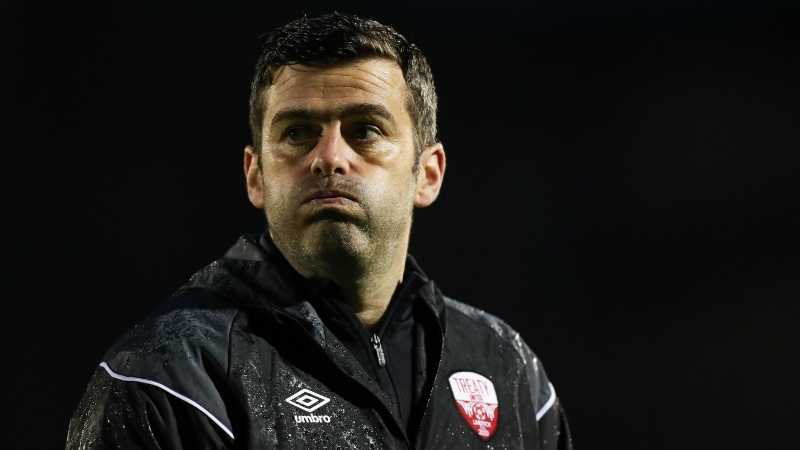 Galway Utd dropped to second in the First Division table after they were held to a scoreless draw at home to Treaty Utd.

The Limerick side frustrated Galway throughout. The home side were thwarted on a number of occasions by Treaty goalkeeper Conor Winn. The former Galway keeper brought off saves to deny Ronan Manning, Killian Brouder and Conor O'Keeffe while Manning hit the post.

Alex Murphy hit the side netting right at the end. Enda Curran had the best chances for the visitors.

The home side started lively with Murphy and Manu Dimas causing problems but overall they lacked a cutting edge.

As the half wore on Treaty began to come into the game and had the best chance in the 12th minute. Dean George with the ball to Matt Keane he in turn put it into the area but Curran really should’ve done better with his effort.

Jack Lynch then tested Galway netminder Conor Kearns while Conor McCormack put in a tackle on Lee Devitt as Treaty went on the the attack.

In the 20th minute Dimas put a decent ball into the box butWinn was out to gather. A duck on the pitch caused the most excitement in that opening half. Before half-time, Treaty broke but Galway were able to clear the danger.

One minute into the second half O’Keeffe’s effort was palmed away by Winn. Minutes later Manning’s curling effort came off the post while in the 52nd minute Brouder’s header brought a fine save out of the Treaty keeper.

Winn denied the home side again in the 58th minute; making a good save from Manning.

As the game went on Galway started to pile on the pressure. Stephen Walsh’s header in the 61st minute just went wide while he had the ball in the back of the net one minute later after a Waweru cross but it was ruled out for offside.

In the 71st minute Curran tried his luck from a tight angle and it just went wide. Try as they might, the home side couldn’t get a winner.