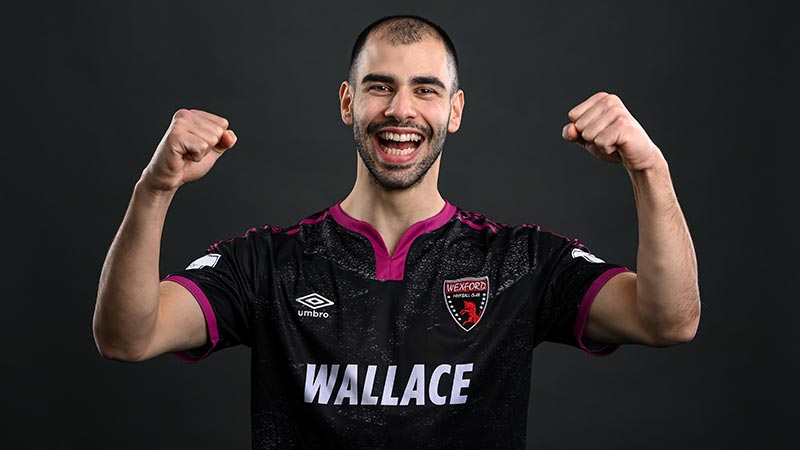 Jack Doherty had the opening shot of the game for the visitors which whistled just over the bar of Sean Barron’s goal.

Cobh struggled to create a chance in the opening quarter with James O’Leary’s speculative volley from long range the closes they got.

Wexford lost captain Joe Manley through injury on the half hour mark for what after going down with a heavy knock through a collision.

Neither side managed to dominate from there on in what was a scrappy half of football, devoid of much quality.

The second half started in a similar vain before Wexford broke the deadlock in the 53rd minute. Jack Doherty created the chance by running in behind the Cobh defence before giving the ball to Conor Davis who slotted the ball into the bottom righthand corner.

That goal seemed to give the visitors the initiative to take control of the game with Cobh struggling to keep hold of the ball and were penned well inside their own half.

Wexford doubled their lead in the 74th minute with Jack Doherty netting a fantastic free kick from 40 yards out on what was a very impressive performance from the number 10.

Ian Ryan began to ring the changes with the goalscorers Davis and Doherty rested for the final few minutes.

Indeed it was Substitute Dinny Corcoran who made it 3-0 five minutes from time to add another to his century.
3-0 is how it finished in a poor game. Not that Wexford will care as they claimed the three points and will go into next week’s game against Longford Town full of confidence.

As for Cobh, it was another disappointing performance at home and will need to regroup quickly ahead of the Cork derby in Turners Cross next week.