Walsh bags brace for Galway in win over Wexford 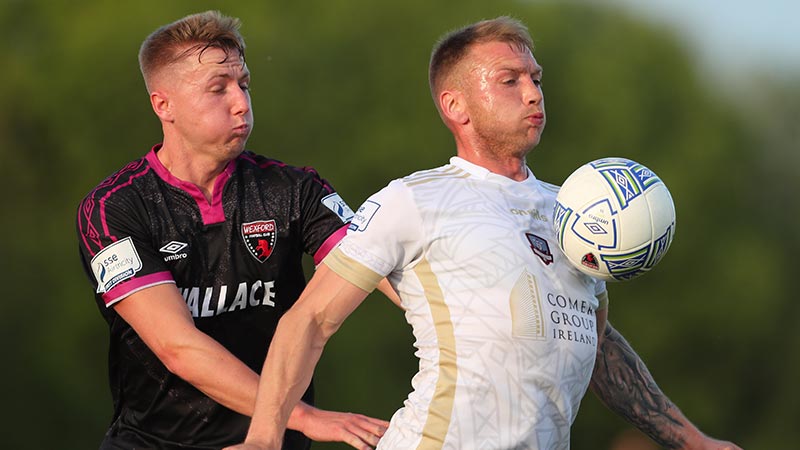 A brace from Stephen Walsh helped Galway United to a 4-0 win over Wexford FC at Ferrycarrig Park tonight.

Killian Brouder and David Hurley also got on the scoresheet as The Tribesmen go level on points with league leaders Cork City.

The visitors had the result wrapped up before half-time, netting three times before the half hour mark.

Brouder headed in the opener on nine minutes, finding himself unmarked from a David Hurley.

Five minutes later that lead was doubled. A sloppy pass from Wexford goalkeeper Alex Moody gave Galway a throw-in which Ed McCarthy took quickly to pick out Stephen Walsh in the 18-yard box. Walsh turned and found the back of the net with a half-volley from a very tight angle.

United’s third came from another lapse in concentration from the Wexford defence. Again it was a Hurley corner causing issues, this time curling to the back post to find Walsh all alone who bundled the ball into the back of the net.

Ian Ryan decided to change from his preferred 3-5-2 formation to a back four and Wexford struggled to move the ball up to their front three.

They did have two shouts for penalties when Jack Doherty and then later Conor Barry went down in the box but both were waved away.

The second-half didn’t provide too many chances as the hosts became more frustrated, receiving three yellow cards in the space of 10 minutes.

Wilson Waweru had a chance on the hour mark when a long throw fell to him inside the box, but his effort was tame and fell into Moody’s hands.

With 20 minutes to go the final crushing blow was delivered to Wexford. A tug of Walsh’s shirt from Kevin McEvoy resulted  in a penalty being awarded and Hurley stepped up to convert from 12 yards to add to his two assists on the night.

Tonight’s result means that Galway are now level on points with league leaders Cork City. Wexford travel to St. Colman's Park to face City next week, meanwhile Galway are at home to bottom of the table Athlone Town.