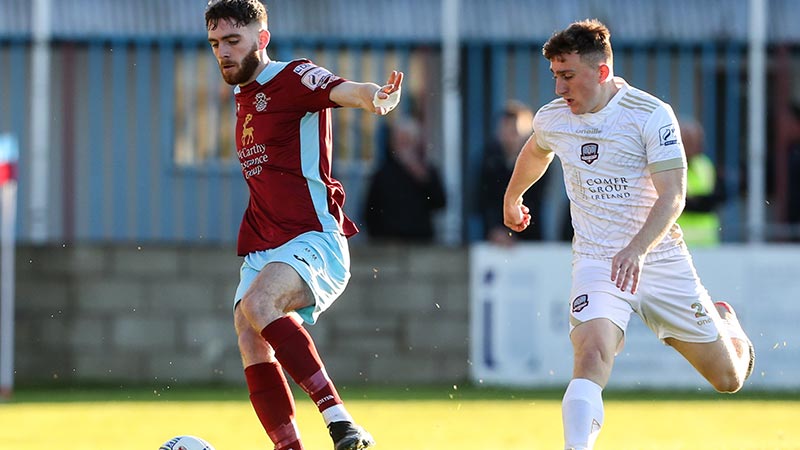 Three first half goals saw Galway cruise past an ill-disciplined Cobh side 4-0 at St. Colman’s Park.

Cobh started the better in the opening couple of minutes as Jake Hegarty’s free kick forced a good save from goalkeeper Conor Kearns.

The Rams suffered a major injury blow in the 12th minute however as Conor Drinan, who was on a four-game scoring streak, was forced off injured after a dangerous head collision.

This incident proved to be the turning point in the half as from there on, Galway began to take control. Their efforts were rewarded on 21 minutes when Max Hemmings met Wilson Waweru’s pass before slotting the ball home for a 1-0 lead.

Galway continued to be the team in the ascendancy and doubled their lead on 37 minutes through Ed McCarthy. A very impressive finish from the striker after he managed to make space for himself just outside the box before looping a left-footed shot over goalkeeper Sean Barron and into the top corner.

McCarthy would double his tally on the stroke of half-time when he was first to react from Conor McCormack’s corner hitting off the post before volleying it low into the bottom corner.

Galway picked up with they left off in the second half as they continued to push forward for a fourth goal. David Hurley had the ball in the net after finishing a three on one move, his goal however was ruled out for offside.

It was stop start for the rest of a game which was effectively over as a contest at half-time as both sides rang the changes.

Cobh struggled to make any inroads on the scoresheet while they also picked up seven yellow cards to compound a miserable night for the Rams.

Galway got a fourth in injury time through substitute Manu Dimas to cap an impressive display from John Caulfield’s side who keep pace with leaders Cork City at the top of the table.