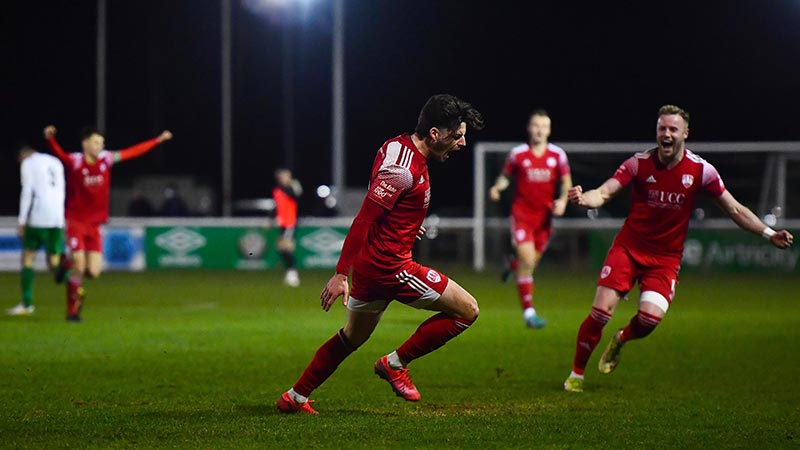 Two goals in three minutes during the opening half helped Cork to an impressive 2-0 victory over Munster rivals Waterford.

The first ten minutes started in typical derby fashion with both sides playing at a frenetic pace, struggling to keep hold of the ball.

City got the breakthrough on 15 minutes when Ruairi Keating latched onto a poor pass from Kevin Joshua to Eddie Nolan deep inside their own half. The number nine sped past the pair and made no mistake in tucking the ball past goalkeeper Brian Murphy.

It got even better three minutes later as Darragh Power failed to clear a cross and instead hit Cian Murphy and into the Waterford net to send the shed into raptures.

Matt Healy nearly made it 3-0 before the break when his fantastic, volleyed effort from long range brought an even better save from Brian Murphy to keep the deficit at two at the interval.

Waterford were better in the second half as they began to dominate possession and chase a goal. Roland Idowu had their first shot in anger in the 63rd minute as his half volley skidded over David Harrington’s post.

Lewis Britton came close for the Blues on the 73rd minute when he missed from close range off a corner where he appeared to see the ball late. Moments later, Phoenix Patterson was inches away as he forced Harrington to make an excellent save at his near post.

That’s as close as Ian Morris’s side came however 2-0 is how it how it finished in front of 3,000 fans at Turners Cross. A first home win for Cork over their Munster rivals since 2018 and a fourth clean sheet in five games to put them top of the table after five rounds.

Colin Healy’s side travel to Treaty United for another Munster derby in Limerick while Waterford have a bye week.