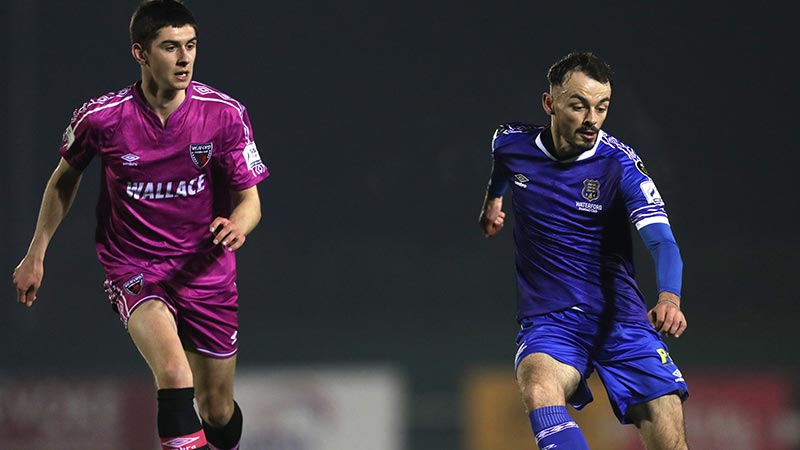 Waterford picked up all three points in the first South East derby of the season against Wexford. Goals from Junior Quintra and Phoenix Patterson cancelled out Conor Crowley’s equaliser in a 2-1 win at the RSC tonight.

The Blues got off to a perfect start when they were awarded a penalty after just seven minutes for a handball. Quintra sent Paul Hunt the wrong way to open up the scoring.

Ian Morris’s men looked by far the better side for the first 20 minutes with Wexford looking rattled by the early penalty.

After the half hour mark they managed to find their feet, Harry Groome with a decent effort from distance.

Eventually they did find the equaliser thanks to a Conor Crowley free-kick that curled into the bottom corner.

A miss-hit from Jeremie Milambo found Phoenix Patterson inside the box who stroked the ball past Paul Hunt to reinstate the host's lead which they took into half-time.

Wexford looked determined after the restart with Aaron Dobbs causing problems getting in behind the Waterford defence.

The end-to-end nature of the first-half ceased for a while with a lot of stoppages and bookings taking place over a 20 minute spell.

It wasn’t until the final 15 minutes when either side would create a substantial chance.

Louis Britton nearly scored a goal of the season contender when he dribbled past three Wexford defenders but he failed to beat Hunt in the goal.

An Aaron Dobbs cross left Thomas Considine with an open goal from three yards out but his header clipped the bar.

Dinny Corcoran would also scrape the frame of the goal with a lobbed effort five minutes from time.

Tonight’s win means that Waterford go three points clear at the top of the table ahead of Cork City.

The Blues travel to Turners Cross for another top of the table clash in the Munster derby next week.

As for Wexford they now find themselves fourth and must test themselves against another former Premier Division opponent when they host Longford Town at Ferrycarrig Park.