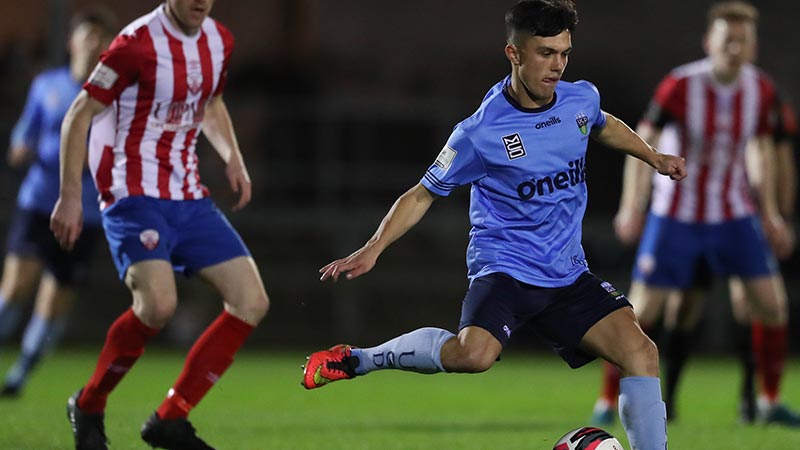 UCD had to suffer to guarantee their presence in the First Division play-off final against Treaty United, as they got beaten by 2-1 at the Belfield Bowl.

Andrew Myler’s boys saw themselves down to two goals for more than one hour, with Adam Verdon’s goal falling from the sky after Stephen Cristopher being sent off.

After the 3-0 pocketed in during the first leg, the Students saw a do-or-die United reopening the discussion inside the first ten minutes through Conor Melody early goal.

Conor Melody set fire to the Bowl with an eight-minute shot from the edge of the box, with some questions to ask the goalkeeper Lorcan Healy, relighting Treaty’s hopes to pull out a miracle in the capital.

The tremendous boost of confidence brought them forward looking for more; Clyde O’Connell had the chance to leave it all in a mess with a header, as he saw Melody answering much better to this ball.

The foundations got shaken on the home side and at the back of Colm Whelan they came yet again; His powerful shot looked too much to be stopped but a much-alert Tadhg Ryan pull out a brilliant save.

Five minutes from the break, Marc Ludden kept his team held to the discussion with an unbelievable clearance over the goal line following a close-range header.

The matters became even more open four minutes in the second half, as a superb header from Anthony O’Donnell at the back post brought a 2-0 to the score.

However, Stephen Cristopher turned it into a serious mountain for the Limerick side to climb just two minutes later, as he got sent off with a straight red card for a bad challenge on Eoin Farrell.

The complexion of the game changed completely, bringing the blue outfit forward to close to the match, and eventually they got it through a mistake from the opponent’s defense.

A poor trying to win a corner let Adam Verdon in a privileged position inside of the box, as he slotted it home with a left-foot shot to bring some piece for the Dubliners.

Even after being down to ten fighters, it was the visitors coming the closest to bring the fourth goal of the afternoon, against a side that not even after Cristopher's red card managed to find themselves. With two performances likes this one, surely Treaty’s outcome in the play-off would be much different.

UCD will now battle with Bray Wanderers in the next stage.