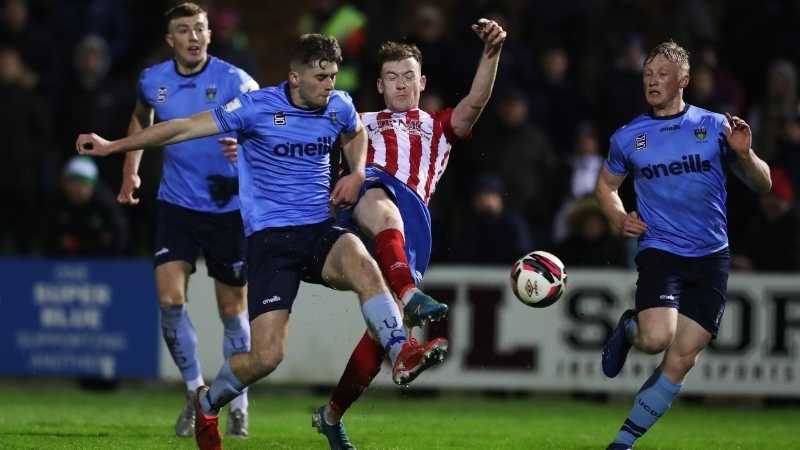 A Tadgh Ryan mistake gifted UCD an early advantage in the first leg of the First Division play-off semi-final, at Markets Field this evening. The Students came out 3-0 winners against Treaty United in a cagey match.

The opener came after Paul Doyle whipped a free-kick high into the Treaty box. Out came Ryan, whose attempted punch diverted the ball into the net he had just vacated.

Colm Whelan doubled the lead after 80 minutes with a cultured right-footed finish.

It was then put out of sight on the counter-attack, as Whelan added his second of the game to make it three.

The opening exchanges were what you would expect from a high-pressure game. Neither side wanted to make a mistake, and so (with some help from the uneven surface) play was disjointed and nervy.

While neither team wanted to make a mistake, one did come. It was Ryan who was the unfortunate party involved. A wide Doyle free-kick was heading towards a group of bodies away from the goal, up jumped the Treaty ‘keeper, and a wild deflection made this an evening he will want to forget.

This gave Andy Myler’s men a leg up heading into the second 45. It seemed that the Students were content to sit on their lead and see out the game, with no-nonsense defending preventing the Shannonsiders from creating any chances.

One did eventually come, as substitute Dean George missed a golden opportunity to put the hosts level. A miss that they would come to regret.

The first-division’s top scorer then burst into life. First, Whelan took a pass from Liam Kerrigan, opened up his body and caressed a finish inside the right post. Then he sealed an emphatic win by expertly taking down a Lorcan Healy long ball, sending two defenders tumbling over each other, and cooly slotting a left-footed shot into the net.

Three goals up, UCD will have a much easier task than United heading into the second leg. It’s fair to say that Tommy Barrett will need a miracle to overturn a considerable deficit away from home.